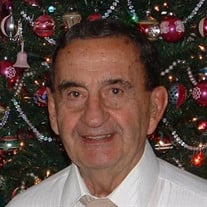 Adam Nick Ginther, 97, knowing that his family loved him, passed from this world to the next on Thursday May 14, 2020, at the Masonic Village in Burlington Township, NJ, due to complications associated with old age. Adam (an only child) was born on the family farm in Florence Township, NJ, to Adam and Helen (Wirth) Ginther on November 21, 1922. That farm was his home for the next 75 years before it became the new NJTP Exit 6A. While in high school, he aspired to be a Future Farmer of America while playing guitar in a small, locally popular band. As a farmer, he raised pigs and grew crops of grain. One day while he was at the local garage he often frequented, he met a fetching young lady who was there visiting her uncle. And wouldn’t you know, after numerous trips to her family’s home in Long Island (including some with slaughtered pigs in the back seat of his car to impress her folks!) Adam married the beautiful city girl and only child, Mary Agnes Schweter, in February of 1948 and started a family which eventually included two daughters and one son. In addition to becoming a Dad, he later became a member of the American Turners in Riverside, NJ, where he took up ‘wrastling’ and became part of a wrestling troupe where he became known as “The Adam Bomb.” This tight-knit group of buddies put on many shows (including stunt chairs broken over heads) to the delight of cheering crowds. Once it became apparent he could no longer support a family just tilling the land, he learned to become a skilled machinist. He eventually worked for Rohm & Haas Company in Bristol and Croydon, PA, and retired after 30 years. Some believe the combination of his chemical exposure at Rohm & Haas and the naturally occurring arsenic in his home well water may have helped preserve him for his 97 years. Others say, it was his dedication to being physically fit and playing it safe (‘Safety First’) that helped him reach his later years. Over his amazing lifetime, Adam enjoyed fishing with his family and friends; trying to get his children interested in gymnastics; giving his children, grandchildren, and their friends, rides on tractor-towed sleds through the snow or truck-towed wagons through the fields; teaching his kids to drive around the property at much too young an age; going to flea markets and yard sales; and being an avid collector of antique farm implements, tools, toy trains and trucks, and railroad memorabilia. He relished every opportunity to give his visitors a tour of his collections and provide a little history lesson on his interesting treasures. He was also a big fan of anything to do with Allis-Chalmers-- a maker of tractors, threshers, combines, farm implements, bulldozers, and other machinery. Adam experienced great sadness when the NJTP annexed the farm, forcing him to downsize his collections prior to moving to a new home in Edgewater Park. Adam was also an incredible handyman, just ask his children and grandkids! During his “retirement” when he found himself working more than ever, he was available 24/7 to come-to-the-rescue to fix anything in a home, car, or business--whether it be a carburetor (pre EFI for the younger folks); plumbing leaks, clogs, and flooded basements; electrical matters; building projects; painting; malfunctioning appliances, etc., etc., etc. He would arrive via his pickup truck with his big metal tool boxes, other buckets filled with any materials he ‘might need’, and additional heavy tools for ‘just in case’. If there was some obscure gadget he needed to complete a job, and there wasn’t a tool available; he would fabricate one in his basement machine shop! The only thing he expected in return was a cup of coffee and a piece of cake, or something else to satisfy his notorious sweet tooth. He would also need to have his desert immediately after dinner, and then another when everyone else was having theirs—no such thing as too many sweets! Well into his 90s, Adam still managed to do all his own yard work and help wherever he was needed, as long as it didn’t involve him getting up on a ladder (he fought a ladder, and the ladder won). Adam also had a quirky sense of humor. Even near the end of his life, he maintained his dry wit by answering people that would ask him, “What’s your secret to living such a long life?” with “Just don’t die!” Or, if he was asked, “How do you feel?”, he would respond, “With my hands of course!” Adam was predeceased only by his parents Adam and Helen (Wirth) Ginther. Sadly, he leaves behind his beloved wife of 72 years, the still-going-strong Mary Agnes Ginther; his two daughters, Linda Blumberg (Benjey) of Medford, NJ, and Elizabeth Taylor (Richard Ritting) of Delanco, NJ; and his son, Adam Ginther (Terry) of Allenwood, NJ. He is also survived by three adoring grandchildren, Alyssa Robin (Blumberg) and her family of Sunnyvale, CA; Nicholas Ginther (man’s best friend, Radar) of Brick, NJ; and Kathryn Sarlo (Ginther) and her family of Matawan, NJ; and three wonderful great grandchildren; Adelyn Roo, Rosalie Mae, and Evan Nicholas. Adam will be greatly missed by all who knew and loved him throughout his long and meaningful lifetime. A heartfelt thanks to Acacia Hospice and the Masonic Village nursing staff for tending to Adam’s end-of-life needs while the family could not be with him. Due to COVID-19, his final arrangements will be private. There will be a memorial service to celebrate his life at a future date once it is safe for all his friends and family to gather. If you wish, in lieu of flowers, memorial donations can be made to Acacia Hospice, 902 Jacksonville Road, Burlington, NJ 08016 or any charity of your choice.

Adam Nick Ginther, 97, knowing that his family loved him, passed from this world to the next on Thursday May 14, 2020, at the Masonic Village in Burlington Township, NJ, due to complications associated with old age. Adam (an only child) was... View Obituary & Service Information

The family of Adam Nick Ginther created this Life Tributes page to make it easy to share your memories.

Adam Nick Ginther, 97, knowing that his family loved him, passed...

Send flowers to the Ginther family.