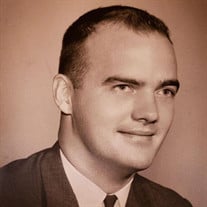 Alfred Oland Powell, formerly of Mt. Holly passed away peacefully with family at his side on August 19, 2020. Mr. Powell, better known as Fred, was the beloved son of Miles Powell Senior and Grace Taylor Powell of Mt. Holly, and preceded in passing by brother Miles Powell Jr. and his wife Jeanne. He is survived by sister Barbara Wetherill, sons Miles II and his wife Susan, Leigh and wife Jennifer, and Brian; grandchildren Brian Jr. (wife Jess), Casey, Paige, Madison, Avery, Miles III, Henry, and Teagan; great grandson Colt Powell; nieces Phyllis and husband Mark Bernstein, Kimberlee, Kristin and husband Scott Mahoney; nephews Thomas Powell Jr., Timothy Powell and wife Ginny, Todd Powell and wife Charlene. He was also step-father to Mike and Marjorie Harris. He was known as “Grandfather” to his grandchildren and “Uncle Freddy” to his nieces and nephews. Born March 31, 1931, Fred was well known for his prodigious athleticism and intellect, starring as a two-time all-state football player, all-state basketball, one-time New Jersey state record holder in the shot put, Burlington County Athlete of the Year for 1949, and inaugural member of the Mt. Holly High School (Rancocas Valley Regional) Hall of Fame. Fred went on to play football as an offensive tackle at then perennial powerhouse Princeton University and was a member of the 5th ranked and undefeated Tiger team of 1951 where he was a teammate of Heisman trophy winner Dick Kazmaier. He was a proud Princeton alum and often attended alumni weekends with a fondness for marching in the P-rade. He graduated with a degree in History in 1953 and then served two years in the Army as a communications specialist, monitoring intercepted Russian army radio signals from a U. S. base in Germany following the end of WWII. Fred considered his protection of the German beer gardens among his greatest accomplishments. Upon leaving the Army, Fred was recruited by IBM where he was a programmer of early house sized computers leased to businesses for the first time. But Fred’s real calling was in the realm of language and debate. He earned his law degree from Rutgers University and after a stint as a Burlington County prosecutor, started his own practice. Far from running a high-powered law firm, Fred worked primarily for friends, acquaintances, and referrals from in and around Mt. Holly, often accepting bartered goods (bushels of lima beans were always appreciated) in lieu of currency. What he truly loved was a well-reasoned argument for which he was always eager to participate – in or out of the courtroom. Fred practiced law for over fifty years, but if you couldn’t find him at the office the next best place to look was the race track, marking his program as meticulously as a court brief. He was a good father and a gentleman who had no use for hyperbole or salty language, traits that never go out of style. He was loved and will be missed. The family thanks the staff of Cambridge Crossings in Moorestown for caring for Fred, who they dubbed “the professor” during a difficult time. Funeral Services will be private. In lieu of flowers, please direct donations to The Thoroughbred Aftercare Alliance at www.trfinc.org

Alfred Oland Powell, formerly of Mt. Holly passed away peacefully with family at his side on August 19, 2020. Mr. Powell, better known as Fred, was the beloved son of Miles Powell Senior and Grace Taylor Powell of Mt. Holly, and preceded in... View Obituary & Service Information

The family of Alfred "Fred" O Powell created this Life Tributes page to make it easy to share your memories.

Send flowers to the Powell family.