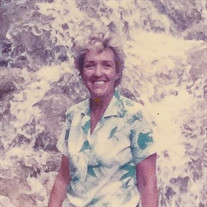 Anita J. Ciaruffoli, RN, C.N.O.R., August 30, 1938 - January 20, 2022 The sum of one’s life is composed of the contributions of one’s life’s work. Dedicated to enhancing the human condition, she believed in quality of character and generosity of the spirit. Born in Birmingham, England, her family migrated to the coast of Britain during WWII. Being a witness to the ravages of war on the country and its people, and having lived through the decades of its effects, it galvanized her loyalty to both the United Kingdom and the United States. With pride in the resolute endurance of the British people and with the gratitude to the United States and Allied Forces, it forged her into a woman dedicated to Patriotism and goodness to all. Anita emigrated to the United States and soon found herself in a country that offered opportunity and growth. She married Rino (Ray) J. Ciaruffoli, MSGT, USAF in 1958 and they had two daughters, Nancy and Louise. In addition to Wife and Mother, she focused her dedication to the nursing profession. She worked as a Floor and Operating Room Nurse at Deborah Heart and Lung Center, which at the time was the premier Cardio, Lung and Vascular teaching Hospital and from which, regional heart and lung programs developed. Immensely respected for her dedication and work, as an OR surgical nurse, she worked along alongside of many esteemed and notable surgeons, perfusionists, pulmonologists, anesthesiologists and nurses. Because of her intuitive awareness, when needed, she was called upon to comfort families when medicine could no longer help, which was an extreme honor for her. Deborah Hospital has helped patients and hosted medical professionals from every walk of life and nation. No matter their origin, Anita had the gift and ability to make people feel comfortable and cared for and in doing so, she touched and enriched many lives throughout her years. Professionally, she was a two-term NJ State Cardiovascular Surgical Nursing Consultant, which she was immensely proud to serve as. Though a British citizen, her dedication to the United States and the US Military were paramount to her. She was committed to giving more than was given to a country she was grateful to. Her stoicism, conviction and dedication were only matched by her love of a good beat, her sense of humor and wicked wit. She enjoyed spirited and stimulating conversation. Prudent and careful, she also had great business-sense. Anita enjoyed the gifts of her surroundings and saw and appreciated the wonder and beauty of nature and of creatures great and small. Her heart was magnanimous and her profession and where she worked reflected that. She truly knew and appreciated that value of Life. Anita is predeceased by her Beloved Husband, Ray; Parents, William and Norah Brookes and Brothers Robert and Derek Brookes. In addition to her daughters, Nancy (Terrence) Ciaruffoli-Garvey of Waterford Works, NJ and Louise Ciaruffoli, RN of Moneta, VA she is survived by Nephews, Robert and Michael Brookes and Niece, Catherine (nee) Brookes and their families, Kent, England; The Ford, Hollingum, McDougall, Brookes and Bailey Families, England; Nieces Pamela Rupp and Kelly Schurman, Phoenix, AZ. Dear Family Friends, Karen and Alan Anstice; Gemma, Casey and Lily Cook; Gareth, Vicki and Ada Anstice and Mark, Allison and Lucy Holden, all of Kent, England. Colleague and Friend, Chizuko Williams, RN, Mt. Holly, NJ; and Dear Friends, Maryann (Sissy) Cox and family, Pemberton, NJ; Wes and Jean Frazier, Beach Haven; Dr. Jose Poveda, Hempstead, LI; Joan Sullivan, Oceanside, LI; Childhood chums, Rosalyn Benson, England and Mariam Kerekach, Fla; and Friends, Maureen Sisco, Sandi DeSanto, Eileen Reingold and Jake and Kathy Van Herwaarden, all of Leisuretowne, Southampton, NJ. Service and Interment will be private. In lieu of flowers, donations can be made in Anita’s name to Deborah Heart and Lung Center; Samaritan Center of Voorhees; or the Burlington County Animal Shelter. Arrangements are being made with the Love and Support of Perinchief Chapels, Mt. Holly, NJ

The family of Anita J Ciaruffoli created this Life Tributes page to make it easy to share your memories.

Send flowers to the Ciaruffoli family.