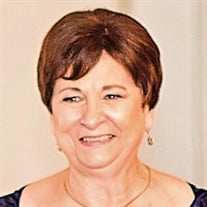 Anna Marie Whelan (nee Massa), 74, of Bensalem, PA, passed away on November 28, 2021, after a long bout with cancer. Anna Marie was the wife of her loving husband, Paul Whelan, for nearly 53 years; loving mother to Paul Whelan, Jr. and Jack Whelan (Bridget Shope); and grandmother to Julian Whelan, Adeline Mae Whelan, and Scarlett Rae Whelan. She is preceded in death by her parents, Michael Massa and Caroline (Amoriello); brother, John Massa, and her sister, Irene Massa (Richardson); and is survived by her sister, Kathleen Massa McCarthy and her two best friends, Barbara Ann Holzapfel and Theresa Ann Leone. A graduate of West Catholic Girls High School in 1966, Anna Marie went on to work first at the Philadelphia Zoo (during her junior year of high school), one of her favorite memories, and then later at Atlantic States Group, where she spent nearly 14 years among a terrific support group of women who kept her spirits high while she battled cancer. A member of Immaculate Conception Church of Levittown, PA, from 1969 until 2003, she served as Eucharistic Minister and Minister of the Sick, and taught Catholic education for nearly 18 years. Anna Marie later joined the Sacred Heart Church in Mount Holly, NJ, also serving as Eucharistic Minister, and became deeply committed to the Society of St. Vincent de Paul, where she volunteered her time feeding the hungry and helping the needy for a number of years. Her Memorial Mass will be Celebrated on Tuesday, December 7th at 10:30 AM at the Sacred Heart Church, 260 High St., Mount Holly. There will be a livestream available at this link: https://youtu.be/mZ_9fbBoDhs In lieu of flowers, contributions may be sent in her name to the Society of St. Vincent de Paul, c/o Sacred Heart Church, 260 High Street, Mount Holly, NJ 08060-1404. Arrangements by the Perinchief Chapels, Mount Holly.

The family of Anna Marie Whelan created this Life Tributes page to make it easy to share your memories.

Send flowers to the Whelan family.