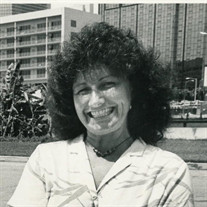 Betty Ann Norcross McCoy, “Bett” of Brooksville, Florida passed away on September 30, 2020. She was 77. Bett was born in Mt. Holly, New Jersey. She was the daughter of the late Paul Norcross and Sally Norcross Haines. Her father died when she was very young and her mother married Bill Haines and together they raised their family in Hog Wallow, Burlington County, where she would work on the family’s Cranberry Farm every summer. Her father Bill, passed away in 2007. Bett was a graduate of Oakcrest High School and the University of Georgia and had lived back and forth between Chatsworth, New Jersey and Florida, before permanently moving back to Brooksville in 2017. Bett was a journalist and reporter and worked for Gannett newspapers. Over the course of her career, she was the South Carolina bureau chief for the Augusta Chronicle and Augusta Herald before becoming the Hernando bureau chief for the Tampa Tribune, where she also wrote a weekly column. Eventually, she and her husband Aldo came back home, where she worked for the Press of Atlantic City. After retiring to Florida, she volunteered for the Gainesville Library and enjoyed reading, working on puzzles and gardening. Bett was smart and observant, two qualities that served her well during her reporting career. She took in the world with one raised eyebrow and always gave it to you straight. She worked hard; she was organized; she was funny, and most of all, she loved her family. She was predeceased by her sister & brother-in-law: Karen “Kay” & Bob Breitzman, and is survived by her husband Aldo McCoy of Brooksville, FL; a son Scott (Dawn) Doerr of Brooksville, FL; 2 grandsons, Nicholas & Jason Doerr; her brother Bill (Nadine) Haines of Chatsworth, and sister Holly Haines of Chatsworth as well as many nieces and nephews. A Memorial Mass will be Celebrated on Thursday, November 19th at 11:00 at St. Mary of the Lakes Church, 40 Jackson Rd., Medford, NJ 08055. Contributions in her memory may be made to the American Cancer Society www.cancer.org

Betty Ann Norcross McCoy, &#8220;Bett&#8221; of Brooksville, Florida passed away on September 30, 2020. She was 77. Bett was born in Mt. Holly, New Jersey. She was the daughter of the late Paul Norcross and Sally Norcross Haines. Her father... View Obituary & Service Information

The family of Betty Ann "Bett" Norcross McCoy created this Life Tributes page to make it easy to share your memories.

Send flowers to the McCoy family.