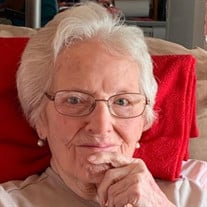 Betty Lou 91, resident of Ventnor, NJ, passed away peacefully at home with her daughters and snuggled by Cari cat on February 19. Betty Lou was predeceased by ex-husband C. Mark Barnard Jr, daughter Jackie and son C. Mark III. She is survived by daughters KC (Richard Gober) and Mickey (Kevin Kavanagh), daughter-in-law Felicia Mennin, grandchildren Kelly Gober (Tony Falabella), David Long Jr, Michael VanNess (Danielle Pouleres) and Alex Barnard, great grandchildren Julia Kay Falabella and Jackie VanNess. Betty Lou grew up in McKeesport, PA. As a young adult, she lived in Washington DC where she met her husband Mark in 1955. Directly after marriage, Mark left for a job in Johannesburg, S. Africa. Betty Lou followed months later on the Queen Mary alone to meet him. This was the first of many trips around the world to places such as US, Canada, most of Europe as well as Iceland, China, South America and back to S. Africa. She was a student at Penn State as an English major. After parenting her four children in Trenton, she was employed by Family Services of Burlington County from 1975-1998 where she worked her way from Bookkeeper to Executive Vice President and CFO. Betty Lou also had many professional contributions such as Chair on Burlington County Human Services Advisory Council from 1986-1990, was the author of the formula “Sum of the Digits” 1980, Member of Burlington County College Board of Trustees 1984-1999, Volunteer and Treasurer for Liberty and Prosperity 2006-2012 and was awarded ‘Professional Woman of the Year’ from the Burlington County Freeholders Committee on Women 1993. Active in local and county politics, she was a Republican Candidate for NJ Assembly in 1979 and 1983 where she coined herself as “Betty Lou Who” and she was a Republican Delegate to 1984 National Convention in Dallas. True to form, when Betty Lou turned 77 on 7/7/7, she threw herself a party. At her 65th surprise birthday party, son, Mark toasted her saying: “When I think about Mama / Betty Lou, the word INDEPENDENT comes to mind. I think about DEPENDABILITY, but never ever PREDICTABILITY. PERFECTIONISM comes to mind, but unlike many perfectionists, Betty Lou is willing to RISK FAILURE. TREMEDOUS ENERGY, living proof that if you want to get something done, ask a busy person. STRONG WILLED with CONVICTIONS that rarely go uncommunicated. DEMANDING: with high expectations of those around her. She returns no less and often exponentially.” Betty Lou was tough but fair, dramatic and funny, sassy and brilliant. A real spitfire! You always knew where you stood with her. The Barnard Family wants to especially thank Jennie Bristol who stayed by Betty Lou’s side during her last years helping her with EVERYTHING. Also want to thank Janet Ortiz, her alternate caretaker. Heartfelt gratitude goes to Diane Alberto, RN and Liz Stevenson, RN from Holy Redeemer Hospice. A life celebration memorial will be announced at a future date. Perinchief Funeral Home in Mt Holly will be handling all funeral arrangements.

The family of Betty Lou Volk Barnard created this Life Tributes page to make it easy to share your memories.