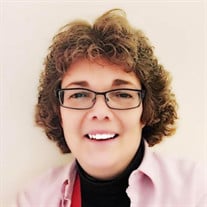 Brenda Lynn Judd of Delanco, NJ, passed away on February 12th, 2022, just days before her 57th birthday on February 15th. She grew up in Burlington Township and graduated from Burlington Township High School Class of ‘83, where she excelled in softball and field hockey. She went on to pursue a Master of Physical Therapy degree from Temple University in May, 1997. Brenda was employed by Genesis and worked at Juniper Village in Williamstown as a physical therapist. She grew up in the Beverly Presbyterian Church and was a long-time member. She served there as a Deacon. Brenda was a devoted caregiver to her mom and they enjoyed traveling together to warm and sunny destinations. Never having children of her own, she was a doting mother to her numerous cats. A Red Sox fan, a favorite memory was going to Fenway Park to see her team play. She won awards every year for her beautiful Christmas displays. She loved spending time in the yard and working in her flower gardens. Her all-time favorite television show was Columbo. She loved old movies and could tell you everything you wanted to know about the actors and actresses that starred in them. She is survived by her father, Walter Judd, her mother, Barbara Judd; her sisters, Barbara (Paul) Schellhardt and Bonnie (Jerry) Kolber; nephews Dan (Jaime) Schellhardt, Sean Martin, Ryan Martin, Matthew (Lauren) Martin and niece, Paula (Matthew) Marcus; great nephews and nieces, Isabella and Aubrey Marcus, Luke and Chloe Schellhardt, Sean and Adrianna Martin, and Owen Martin; and her very dear friend, Gosia Kaczmarski. She will be missed. A memorial service is planned for Saturday, March 12th, 2022 at 10 AM at Beverly Presbyterian Church, 121 E. Warren Street, Edgewater Park, NJ. In lieu of flowers, donations can be made to the Burlington County Animal Shelter.

The family of Brenda Lynn Judd created this Life Tributes page to make it easy to share your memories.

Send flowers to the Judd family.