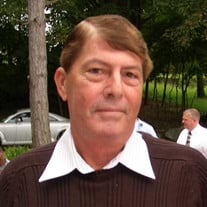 On Saturday, June 5, 2021 Brian Keith Morrison, loving husband and father of four children, passed away peacefully after a lengthy illness at his home in Mount Holly, NJ, surrounded by his family. Brian was born on November 26, 1952 in Mount Holly to Violet Carol (Smith) and William John (Bill) Morrison. He was the second of five children in his family. He attended Sacred Heart School and graduated from Rancocas Valley Regional High School in 1971. After graduating, Brian trained as a cable television installation and maintenance technician and worked for cable system operators in Pennsylvania and South Jersey. It was in Pennsylvania that he met and married his soulmate, Kathleen. By the end of the 1970s, Brian and Kathleen had a young family and he decided to take up a trade he learned from his father who had owned a roofing business. In 1980, Brian launched B&J Contracting, a commercial and residential roofing company. Brian had the gift of gab and was an excellent salesman, and over the ensuing years he expanded B&J to include a full range of interior and exterior repairs, renovations and new construction. For more than three decades B&J Contracting provided steady employment for numerous local craftsmen, laborers and sub-contractors – a record of accomplishment that made him proud. In his free time, Brian loved boating on the Delaware River and Barnegat Bay, or spending a sunny day on Long Beach Island. Brian never missed a Philadelphia Eagles football game on Sunday, which meant that on Mondays during football season for many years he was usually pretty grumpy. Brian was a good cook, and his holiday hams, which were prepared for all major occasions (and sometimes just because his granddaughter wanted him to make one for her), were always a highlight of Morrison family gatherings. Brian was predeceased by his sweetheart and wife of 36 years Kathleen (Wright), his mother Violet, father Bill, and his brother Alan. He is survived by his four children and their spouses: Travis Corson (Theresa Sweeney) of Florence, NJ, Brian Morrison, Jr (Kerry Seaman) of Lumberton, NJ, Sonny Morrison (Nikole Brand) of Eastampton, NJ and Katelyn Morrison (Matt Congdon) of Mount Holly. Brian loved his role as Grandpop to Shane and Carly Corson, Matthew, Ryan, and Jacob Morrison, and the youngest of the bunch, Harlee and Wyatt Morrison, and he was sure that he taught at least a couple of his grandkids to curse properly. Also left with a lifetime of fond and funny memories are his siblings and their spouses, Bill Morrison (Monica Reece), Sheila Morrison Reed (Gregg Reed), Terry Morrison (Janette Valencoure) and Brian’s many nieces and nephews. A Celebration of Life will be held at Perinchief Chapels, 348 High Street, on June 19, from 9:00 am to 10:45 am, followed by a funeral mass at Sacred Heart Church, 260 High Street, at 11:00 am. Brian will be inurned next to his wife Kathleen in St. Paul Mausoleum at Laurel Hill Cemetery, Jacksonville Road, Burlington, NJ. In lieu of flowers, please consider doing something kind for someone else. Or make a donation in Brian’s honor to Habitat for Humanity.

On Saturday, June 5, 2021 Brian Keith Morrison, loving husband and father of four children, passed away peacefully after a lengthy illness at his home in Mount Holly, NJ, surrounded by his family. Brian was born on November 26, 1952 in Mount... View Obituary & Service Information

The family of Brian K. Morrison created this Life Tributes page to make it easy to share your memories.

Send flowers to the Morrison family.