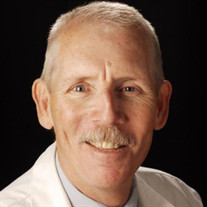 Charlie Dennis, distinguished cardiologist, beloved son, brother, husband, and father of four, passed away on January 7, 2022, at the age of 70. Born on September 8, 1951, Charlie was raised in San Diego, California. He attended Helix High School (1965 – 1969) where he excelled in academics, lead in student government, and participated and lettered in both basketball and football. Charlie graduated from Occidental College in Los Angeles, California. Following the sudden loss of his mother to a heart attack days before his graduation, Charlie decided to pursue a career in medicine. He was accepted to the University of Arizona’s College of Medicine in Tucson. In 1979, Charlie graduated at the top of his class, and secured a residency slot at the nation’s most prestigious medical program, the Brigham and Women’s Hospital at Harvard University, where he served as Chief Resident. In 1982, Charlie began his Fellowship at Stanford University, where he studied cardiovascular diseases; the research he completed, published in numerous medical journals, would go on to transform cardiovascular rehabilitation and drastically reduce recovery times for patients. It was during his time at Stanford that, in 1984, he met Lisa Laubacher on a blind date. The next year the two were married and began their life together in Palo Alto. In 1988, they welcomed their first child, Caitlin. Charlie continued his research at Stanford as an Assistant Professor of Medicine until 1989. The family then moved to San Diego where Charlie worked as a cardiologist at the Scripps Clinic in La Jolla. In 1990, Charlie and Lisa’s second child, Thomas, was born. In 1991, the growing Dennis family moved to Moorestown, New Jersey, where Charlie began work at the Deborah Heart and Lung Center as Chairman of their Department of Cardiovascular Disease. During his tenure, he rebuilt Deborah’s program, transforming the hospital into the predominant provider of cardiovascular care in the tri-state region. In 1993, Charlie and Lisa’s third child, Scott, was born - their fourth, Holly, followed the next year. During this time, Charlie was accepted to the University of Pennsylvania’s Wharton School of Business, from which he graduated with a Master of Business Administration with Honors in 2002 and served as the class (WEMBA-26) Graduation Speaker. After 15 years with Deborah, Charlie joined Virtua The Cardiology Group in 2006, and subsequently became the Director of Cardiac Catheterization for Virtua Memorial Hospital in Mt. Holly until 2015. Most recently, Charlie worked as the Physician Advisor for Shore Memorial Hospital in Somers Point, leveraging over 40 years of experience as researcher, professor, and interventional cardiologist. Throughout his career, Charlie was active in the American Heart Association, serving as President of the Tri-State Region and, later, on the AHA’s National Board of Directors. He also chaired the Cardiovascular Health Advisory Panel for the New Jersey Department of Health for 15 years. Throughout his long career, he received numerous awards and accolades for both his caregiving and professional accomplishments, however, his proudest awards were ones received for teaching. While Charlie lived as a remarkable academic and physician, he will most strongly be remembered as a loving father and husband. Always quick with a joke, a life-lesson, or an amusing vignette, Charlie was a source of constant joy, engagement, teaching, and love. He pushed his children to achieve their utmost, and constantly reminded everyone around him how proud he was to be their father. He knew the joy of marrying his best friend, Lisa, and spent 37 years caring and providing for their family. Charlie is survived by his siblings, Mike and Gini, numerous stepsiblings, in-laws, nieces and nephews, his wife, Lisa Dennis, and their four children, Caitlin, Thomas, Scott, and Holly; he will live on forever in their hearts and memories. A Rosary and Visitation will be held on Sunday, January 16 at 6:00pm at St. John Neumann Church, 560 Walton Ave, Mt Laurel 08054. A Mass of Christian Burial will be held on Monday, January 17 at 10:30am at Sacred Heart Church, 260 High St, Mt Holly 08060. The funeral mass will also be live streamed via the Sacred Heart website. Reception to follow. Please note that facial coverings must be worn. In lieu of flowers, donations may be made in Charlie’s name to the American Heart Association, 7272 Greenville Avenue, Dallas TX 75230. Perinchief Chapels, Mount Holly NJ www.perinchief.com Live Stream of Funeral Mass at Sacred Heart Church https://youtu.be/d3KnSOQeqJU

The family of Charles Andrew Dennis MD created this Life Tributes page to make it easy to share your memories.

Send flowers to the Dennis family.