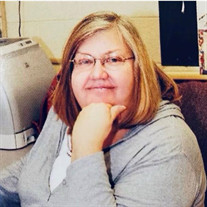 Christine V. Oschell of Surf City, NJ passed away on Tuesday, April 13, 2021 at Deborah Heart and Lung Center in Browns Mills. She was 66. Christine was the daughter of the late Herman and Dorothy Oschell (nee Oberholzer), and the sister of the late Herman Oschell, III, she is survived by her brothers: Francis (Patricia) of West Chester, PA, Gregory of Surf City, NJ, Fred (late Brenda) of Delran, NJ, & Gerry (Margaret) of Hainesport, as well as many nieces and nephews, even more great-nieces and nephews, extended family, scores of friends, colleagues and former students whose lives she touched. Born in Philadelphia, “Tina” grew up in Hainesport as the favorite sister of her five brothers.She later became the aunt who spoiled her nieces and nephews with shopping trips, fun gifts, favorite candy, all the change you could find in her car or bedroom but mostly her love and support. She was a graduate of Sacred Heart School and Rancocas Valley Regional High School. “Chris” as she was known to friends served as Class President for the class of 1972 and built friendships during her school years that have lasted a lifetime. She continued to be the coordinator of reunions and gatherings long after graduation keeping in touch with her classmates near and far. After graduating from Ursinus College, she went on to work at Lenape High School for more than 30 years. She loved being an educator and while English and Latin were among the subjects, she taught the education and support she provided to students and faculty extended far beyond the classroom. She was involved in advising many school activities and events during her tenure including serving as a class advisor, band front director and yearbook advisor to name just a few. Fondly known as “O” the memories she created at Lenape will live on for those who were lucky enough to know her. Growing up Christine was a member of Our Lady Queen of Peace Church for many years and served on the Altar Rosary Society along with her mom and many friends who became family.Her happiest times were spent on the beach; either on her beloved LBI or on one of the many Caribbean shores she cruised to with family and friends. Shopping was her favorite pastime whether it was online, QVC, or an hours long “high adventure” she delighted in finding just the right items for family and friends and her gift presentation skills were unrivaled. Tina had a talent in turning the most ordinary activities into an event whether it was planning a family party, theater trip to a Broadway shows or a vacation with family and friends her attention to perfecting each detail and thoughtful consideration of everyone involved will be sorely missed. Relatives and Friends may attend her walk-through visitation on Friday, April 23, from 6-8pm at the Perinchief Chapels, 438 High St., Mount Holly. Beach attire strongly encouraged; crocs optional. Facial coverings must be worn, and social distance guidelines followed. Mass of Christian Burial will be held privately for family on Saturday, April 24th at 10:30 AM. Everyone is invited to watch the mass virtually at this link: https://youtu.be/RolyuFSr_Qs In lieu of flowers, contributions in her memory may be made to the American Diabetes Association at https://www.diabetes.org/donate You can watch her video tribute here: https://www.tributeslides.com/tributes/show/GN47PPGTXJ5P4C5Z

Christine V. Oschell of Surf City, NJ passed away on Tuesday, April 13, 2021 at Deborah Heart and Lung Center in Browns Mills. She was 66. Christine was the daughter of the late Herman and Dorothy Oschell (nee Oberholzer), and the sister of... View Obituary & Service Information

The family of Christine V Oschell created this Life Tributes page to make it easy to share your memories.

Send flowers to the Oschell family.