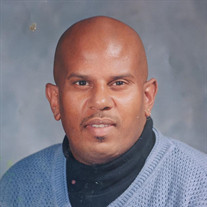 Daryl Sarrell Freeman Pennington was a beloved husband, father, grandfather, brother, uncle, son and friend. He died on August 26, 2021 at age 61. He was born on August 22, 1960 to Ashley (nee Jane Booth) and Malcolm Pennington at Orange Memorial Hospital in Orange, New Jersey. One of five children, Daryl was affectionately known as Buz by those who loved him and quickly established himself as a free spirit who moved to the beat of his own drum. Daryl attended Clifford J. Scott High School in East Orange where he was a state champion soccer player. He dropped out to help care for his ill mother, but later received a diploma from Changes, an alternative high school in East Orange, in 1979. He tried his hand at a number of odd jobs (utility pole worker and car detailer to name a few) before taking on a career as a union floor covering journeyman. In the early 1990s, he founded his own floor covering business PennBrook Interiors and oversaw floor installations big and small across the state of New Jersey. In his 30s, Daryl decided to enroll at the local community college to further his education. He graduated with an associates degree from Burlington County College and went on to complete a bachelors in history with a minor in education at Temple University in 1997. As a college student, he developed a deep love for education-- particularly for at-risk and non-traditional students-- and pursued a career as a teacher in the years immediately following his graduation. He taught adult GED preparation at Temple University, worked as a social studies teacher at the Burlington County Institute of Technology and taught for several years at the Jones Farm Correctional Facility in West Trenton. In 2004, Daryl followed in the footsteps of his brothers Eric and Scott and completed a Juris Doctorate degree from Rutgers School of Law in Newark. Until his death, he worked as a criminal defense attorney. He learned his craft at the knee of the legendary Raymond A. Brown, Esq. and often sought to represent low income clients from communities of color. Daryl also valued service to vulnerable communities. He sat on the board of Women Walking in the Spirit, a mentoring program for at-risk young women. For a short time, he volunteered with Big Brothers Big Sisters of New Jersey. And, along with his brothers Eric and Scott, he created and administered a scholarship at Rutgers Law School for a black woman in financial need in honor of their late mother. Beyond his professional work, Daryl was a man of many interests. He was a voracious reader and lifelong scholar. He was endlessly curious about the world and often joked he had a “mind full of useless information.” Daryl loved Parliament Funkadelic; documentaries-- especially those about history, sports and nature; grilling in his backyard; menswear; classic cars; long car drives; and, towards the end of his life, he started restoring boats-- even though he struggled with motion sickness for much of his life. He had a wry sense of humor and never missed an opportunity to make an off-color joke. Daryl was an avid sports fan and especially loved women’s basketball, Little League baseball and college football. He was an assistant coach for the women's basketball team at Burlington County College in the 1990s, enthusiastically supported his daughters' sports endeavors and briefly refereed Pop Warner football in Burlington Township. Gardening was one of his favorite pastimes and he could often be found riding around his immaculate lawn on his tractor lawnmower. Above all else, Daryl loved, loved, loved his family (including dear friends who were like family) and deeply treasured opportunities to spend time with them. He was affectionately known by many nicknames including Buz, Short Dog, Heavy D and many others he created himself. Daryl is survived by his wife Ola; daughters Whitney and Courtney; son-in-law Mark; granddaughter Masai; brothers Malcolm “Kip,” Eric, and Scott; father Malcolm; a host of dearly loved nieces, nephews and friends; and his beloved dog Chiquita Banana Pooch. He is preceded in death by his mentor, friend, savior and mother Ashley; his sister Lysa and many other very special loved ones. Daryl will be remembered in a celebration of life on Saturday, September 4, 2021 from 11am- 1pm at Perinchief Chapels (438 High Street, Mount Holly, New Jersey). Guests will be invited to share warm thoughts, comforting messages and memories of Daryl. Zoom Meeting Begins at 11 AM EST https://us02web.zoom.us/j/8958843508?pwd=M1l0VGhINDlVZExYN2JRdWcwN0REQT09 Meeting ID: 895 884 3508 Passcode: Penn123

The family of Daryl Sarrell Freeman Pennington, Esq. created this Life Tributes page to make it easy to share your memories.