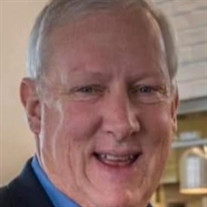 David Larue Fox of Springfield Township passed away on Tuesday, July 7, 2020, at AtlantiCare Regional Medical Center in Atlantic City, NJ. He was 59. Born in Berwick, PA, David earned his Bachelors in Mathematics from Bloomsburg University and his Masters in Education from LaSalle University. He served his country in the US Air Force and Air Force Reserves for 26 years, serving in both Desert Shield and Desert Storm and retired as a Lieutenant Colonel. David was a Captain for Delta Airlines where he worked for over thirty years. His passion for flying took him all over the world. David enjoyed reading history, visiting national parks, attending plays and musicals, and giving his family tours of aviation museums. He took great pride in making homemade ice cream. David loved baseball and visited different ballparks each year with his friends. The soundtrack of his life was the music of Bruce Springsteen. The VFW in Wrightstown and the F&AM in Bordentown counted him as a member. The son of the late Ellen Fox (née Hess), he is survived by his wife Linda Fox (née Freck); his son Evan Fox and daughter Shannon Fox; his father Ronald Fox; his sister Annie Merritt (late Morgan Merritt); his brother and sister-in-law: Stephen and Linda Fox; nephews: Zachary Merritt, and Jacob, Benjamin, & Matthew Fox. He is also survived by his sister-in-law & her husband: Sharon & Paul Tootell; nephews: Sean & Seth Tootell; and his mother-in-law, Virginia Freck (late Stanley Freck). Relatives and friends are invited to visit with the family on Monday, July 13, 2020, from 6-8pm at the Perinchief Chapels, 438 High St., Mount Holly, NJ. A prayer service will be held at 8:00pm. Burial with military honors at Washington Crossing National Cemetery in Newtown, PA, will be private. In lieu of flowers, contributions in his memory may be made to the Juvenile Diabetes Research Foundation (JDRF) at www.jdrf.org.

David Larue Fox of Springfield Township passed away on Tuesday, July 7, 2020, at AtlantiCare Regional Medical Center in Atlantic City, NJ. He was 59. Born in Berwick, PA, David earned his Bachelors in Mathematics from Bloomsburg University and... View Obituary & Service Information

The family of David Larue Fox created this Life Tributes page to make it easy to share your memories.

David Larue Fox of Springfield Township passed away on Tuesday,...

Send flowers to the Fox family.