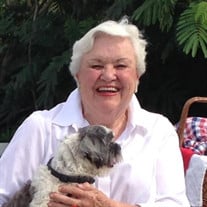 Anderson, Dixie Lee (Nee Smith) of Mount Holly, New Jersey died at home on April 30, 2020 from complications of lung cancer. She was ninety years old. She is preceded in death by her husband, Kenneth W. Anderson, Father, Adolphe R. Smith, Mother, Gwendolyn Mallory Smith and Brother Gregory Mallory Smith. Survivors include: Daughter, Sarah Jo Anderson, Lumberton, NJ., Son, Kenneth Curtis Anderson and his wife, Lisa, Cedar Creek, Texas., Daughter, Norma Joan Anderson Carlson and her husband, David, Iowa City, Iowa., Brother, Reverend Michael Mallory Smith, Stevensville, Montana, four Grandchildren, Stephen Butters and his wife, Kyrene, Leslie Ann Carlson Stern and her husband, Dale, Dr. Kent David Carlson and his wife Dr. Laurie Breeher and Matthew David Carlson and his wife, Holly and Great Grandchildren, Grant, Quinn, Willa, Charley, Stone and Ada. She was born in Cheney, Washington, attended Cheney schools and Sacred Heart School of Nursing in Spokane, Washington. She worked as a psychiatric nurse for the state of Washington. In 1950 she married Kenneth W. Anderson and they traveled over all of the United States, living in Japan at the end of the occupation and on the island of Guam in the Marianas chain. She traveled over much of the Far East and extensively in Europe. In 2007 she and all of her children traveled to East Africa on safari. Mrs. Anderson was published internationally as a newspaper and magazine columnist, author and freelance writer. Her work appeared in many national and international magazines and newspapers. Her popular cooking columns appeared in The Mount Holly Herald and The Little Paper in Burlington County. She was the Food columnist for Family Magazine for over 30 years. She wrote a weekly column “One of Us” for Our Lady Queen of Peace. As the Women’s Editor for the Pacific Broadcasting Company, she wrote, directed, produced and performed for radio and television, presenting a daily radio show and a weekly variety show for television titled “Woman’s World.” The author of seven fiction and non-fiction books and children’s books, she co-wrote with Dr. William F. Damitz, “The Giant Egg” published by My Weekly Reader children’s book clubs. She received an author’s citation from the New Jersey Institute of Technology for that work. She was the author of The Last Magnolia published in 2019. She was a member of the Board of Trustees for the Mount Holly, New Jersey Library and served as the first Public Relations director for the original “Salute to Mount Holly/Mount Holly Day.” She was the publicity chairman for the Mount Holly Historical Society, a member of the Burlington County College Cultural Arts Committee and the Sacred Heart School Parent-Teachers Association. Mrs. Anderson worked with Campfire Girls and Girl scouts of America and served in official capacities for many United States Air Force Officer’s Wives’ clubs of which she was a member. A past member of Beta Sigma Phi in Spokane, Washington, she also sang with the Bel Canto Women’s chorus in that city. While a member of the Mary Mother of God Catholic Parish at McGuire Air Force Base, she volunteered as an assistant to the Catholic Coordinator. As a volunteer she worked at the Walson Army Hospital Pharmacy for 15 years. She is a member of Our Lady Queen of Parish in Hainesport, NJ. As a trained mediator Mrs. Anderson volunteered in the New Jersey Municipal and Superior Courts of Burlington County. In 2002 she was named the outstanding Municipal Court mediator in Burlington County. A visitation and a Mass of Christian Burial will be held at Our Lady Queen of Peace at a later date. Burial will be with her late husband in Arlington National Cemetery at the family’s convenience. In Lieu of flowers, Mrs. Anderson has requested that donations be made to The ARC of Burlington County at 115 E. Broad Street, Burlington, NJ 08016.

The family of Dixie Lee Anderson created this Life Tributes page to make it easy to share your memories.

Send flowers to the Anderson family.