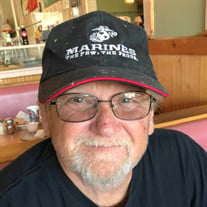 Dominic “Steve” Tuliano, of Mount Holly, passed away August 1st, 2021. He was 70 years old. Son of the late Paul and Hilda Tuliano, Dominic was born October 27, 1950 in Shirley, Massachusetts. Dominic proudly served his country as a member of the US Marines during the Vietnam War. In 1982 Dominic started his career as a Corrections officer for Trenton State Prison, and eventually transferred to Riverfront State Prison where he retired as a Sergeant. After retirement Dominic continued to work as security guard for Burlington County Special services. Dominic is survived by his wife of 35 years Lisa, his children Kyle (Katrina), Chelsy (Kevin) and Cindy (Kevin) Sexton, his grandchildren Taylor, Joseph, Austin, Aubrie, Lukas, and John, and his siblings, Ann, Paul Jr., and Theresa. Funeral services for Dominic will be held on Monday August 9, 2021 at 7pm at Perinchief Chapels, 438 High Street Mount Holly, NJ 08060. Friends and relatives are invited to visit with the family from 5pm-7pm prior to the service. In lieu of flowers donations made be made in Dominic’s memory to the American Cancer Society at www.cancer.org , or to Toys for Tots at www.toysfortots.org or to the Burlington County Animal Shelter.

The family of Dominic "Steve" Tuliano created this Life Tributes page to make it easy to share your memories.

Send flowers to the Tuliano family.