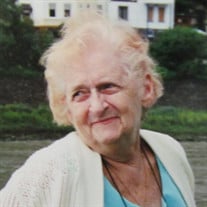 Doris (Lamaze) Morse entered eternal life on Saturday, October 19, 2019, at the rich age of 100. She died peacefully at her Mount Holly home while surrounded by family. Born in Providence, R.I., to Marcel and Viola (Edwards) Lamaze, Doris grew up surrounded by a large, loving family. From a young age, she learned the value of working hard and pinching pennies, while understanding the importance of having fun with friends and family. As a teenager, Doris was proudly baptized and confirmed as a Catholic, a decision she believed guided the rest of her life. Following graduation from Theodore Roosevelt High School in the Bronx, Doris was hired by Western Union and spent years as a teletype operator throughout New York and Connecticut. She traveled by trolley, train and foot to work long hours sending telegrams from places like the Waldorf Astoria and the top of the Empire State Building. It was in a busy Western Union office where Doris met her future husband, Lewis Morse. Their working relationship turned romantic after they arranged to meet for a date at 8th Avenue and 42nd Street in New York City. Doris and Lewis spent time together playing tennis, going to the beach and communicating via Western Union office-to-office mail before he suggested they buy furniture together. That marriage “proposal” led to their wedding on January 15, 1940. In 1946, Doris and Lewis purchased a home in Mount Holly, where they intended to live for a “short stay.” Instead, that home became the heart of the Morse family for more than 70 years. There, they raised their children and welcomed countless friends and family for meals, birthdays, Christmas eggnog and everything in between. Doris also became a central figure at Mount Holly’s Sacred Heart School, where she worked as a secretary and teacher for many years. At home, Doris held court at the head of the kitchen table, where she imparted her love of music, deep religious faith, the importance of education and many words of wisdom. She was strong-willed and never afraid to voice her opinion, but was always happy to share laughs, good wine, and her famous apple pie and potato salad with those around her. Though home was where her heart was, Doris was an avid traveler who enjoyed trips throughout Europe and to places like Cuba and Rio de Janeiro. Doris also had an incredible memory, and she could recall vivid details of her life even from childhood. She never forgot her loved ones’ birthdays or anniversaries, and her thoughtful cards and emails were frequent reminders of her love. Doris was preceded in death by her husband, Lewis; her daughter in-law, Ruth Morse; and her daughter, Mary Linda Giberson. Doris’ spirit is carried on by her children, Lawrence, Michael, Daniel, Thomas and Ann. She also leaves behind a legacy of 12 grandchildren; 13 great grandchildren; one great-great grandson; and many in-laws, nieces, nephews, extended family members and friends. A visitation will take place on Friday, October 25 from 10 to 11 am at Our Lady Queen of Peace Church, Marne Highway, Hainesport. Mass of Christian Burial will be celebrated at 11 am, followed by burial at Sacred Heart Cemetery. Memorial donations may be made in her honor to Father Flanagan’s Boys Town and St. Jude’s Children’s Research Hospital.

The family of Doris A. Morse created this Life Tributes page to make it easy to share your memories.

Send flowers to the Morse family.