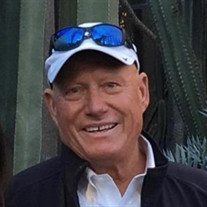 Drew Parker, 67, passed away peacefully on December 13, 2021, surrounded by family and friends. He is survived by his wife of 32 years, Christine; daughter, Amanda; mother, Ann Lampman; twin brother, Mark (Cindy); niece Madeline, nephew Ryan. Uncle Barry Parker and preceded in death by Uncle David Parker, Grandparents Harold T. (Piney) Parker and Charlotte Long Parker. And extended Lampman family, Jack, Jim and Lynne Demmerly. Drew grew up in Moorestown and Beach Haven, New Jersey. He attended Delaware Law School and followed in his grandfather’s footsteps working and building Parker McCay into a successful law practice. Drew went on to establish the law practice Parker, Young & Antinoff in Marlton, NJ where he cultivated longstanding friendships with his clients and colleagues. At a young age, he and his brother learned to fish, clam, and hunt from Piney who helped found the Beach Haven Marlin & Tuna Club Drew was never one to sit still and could be found on the water from Beach Haven to the reefs of Key Largo, Florida with Jimmy Buffet playing in the background. Drew never shied away from adventure and would travel anywhere, as long as there was a fishing scene. With an infectious sense of humor, undeniable generosity, and a one of a kind individuality, he was a friend and unofficial family member to many. A beam of light is an understatement and his positivity and inclusivity made him the life of the party. He refused to let anything get in his way of living his life to the fullest. We invite anyone to send any endearing, funny, or memorable photos of Drew to [email protected] Memorial Services are pending. In lieu of flowers, donations can be made to the Multiple Myeloma Research Foundation, the International Game Fish Association, or the Coral Restoration Foundation.

The family of Drew Parker created this Life Tributes page to make it easy to share your memories.

Send flowers to the Parker family.