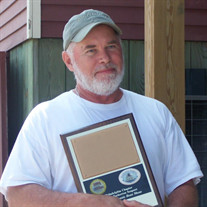 Edward J. Ferris, of Southampton, NJ passed away on June 15, 2022 with loving family by his side. He was born in Burlington, NJ to Harold and Vera (White) Ferris on August 18, 1946. He was 75. He is survived by his son John ( Stacey) Ferris, daughters Jacqueline Kelly and Jennifer (Timothy) Tedesco, and his most dearest friend (and ex-wife), Doris Ferris. He is also survived by his beloved grandchildren, Matthew (Sarah) Kelly, Jr., Patrick Kelly and Isabella, Rocco and Vittore Tedesco; great grandchildren Ryan, Matthew III and Dustin Kelly; and sisters Patricia Willitts, Teresa Herndon, Katherine Epperson, Anne Ricchia and Veronica Kraft, and sister-in-law, Peg Ferris. He is reunited with his parents, and siblings Harold (Skip), Marianne and Daniel Ferris. He graduated Rancocas Regional High School in 1965, and served in the United States Army from 1966 to 1972. He was stationed in Korea, post-war, and received honorable discharge. From there, he was accepted to apprentice with International Brotherhood of Electrical Workers Local 439 (now 351) where he would spend the next 37 years perfecting his trade until his retirement in 2009. That’s when the real fun began! His boat collection grew exponentially and he became very active in the Mid-Atlantic Chapter of the Antique and Classic Boating Society, where he’d been a member since 1988. He trailored his award-winning boats and sporty runabouts between Lake Hopatcong, St. Michaels, Harvey’s Lake, and Barnegat Bay, among others. Ed was instrumental in introducing the now annual Mullica River Cruise. An avid collector of outboard motors, he was also an active member of the Antique Outboard Motor Club, Knuckle Busters Chapter and gathered with them frequently on Lake Lenape. And then there were the cars. His first car was an old 1948 Chevy, shared with brother Skip. While he never let go of a single boat, over his lifetime the garage was a revolving door of street rods and antique Chevys, including his beloved 1979 Corvette and 1931 Street Rod. He maintained them all meticulously, and spent hours car-side at the Mt. Holly Car Show, Cruise Night at Johnson’s Farm and many others across the region, ready to share their history with you or just talk cars in general. He was a talker. More than the boats, cars and club memberships, Ed was ‘Dad’ and ‘Grandpop’, fiercely loved and respected by his kids, grandkids and extended family; and was regarded a ‘best friend’ by so many. He made time for you, was thoughtful, there for you when you needed a hand and made you feel special. His passing leaves a gaping hole in the lives of family and those who knew him well. RIP Dad. Friends are invited to visit with the family on Saturday, June 25, 2022 from 10:00 A.M. - 12:00 P.M. at Perinchief Chapels 438 High Street, Mt. Holly, NJ 08060. A service with Military Honors will be held at 12 p.m. In lieu of flowers, please donate to the Diabetes Action Research and Education Foundation (diabetesaction.org).

Edward J. Ferris, of Southampton, NJ passed away on June 15, 2022 with loving family by his side. He was born in Burlington, NJ to Harold and Vera (White) Ferris on August 18, 1946. He was 75. He is survived by his son John ( Stacey) Ferris,... View Obituary & Service Information

The family of Edward J. Ferris created this Life Tributes page to make it easy to share your memories.

Send flowers to the Ferris family.