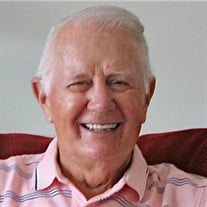 Edward McCole White, 95, passed away peacefully on March 10 in Moorestown, NJ, in the home where he had lived for almost 70 years. Ed White was born in 1925 in Nansuchow, Anhwei Province, China, the fourth child of Henry Harrison White and Irma White White, who were there engaged in missionary work. Forced to leave China shortly thereafter, the White family made a home in Cape May Court House, NJ, and it was there that Ed and his four eventual siblings were raised. Ed graduated from Middle Township High School in 1943. With World War II raging, he enrolled in a Marine Corps ROTC program that put him through college in less than three years, with no summer breaks, first at Georgia Tech and then graduating from Yale University. In 1946 the Marine Corps needed no young lieutenants, and so he remained a reservist. But in October, 1950, coincident with the birth of his first son, he was called to active duty and served a year in Korea, returning home as a Captain, USMC. Ed married Anne Hazard in 1948, and shortly after his return from Korea, the young family settled in Moorestown, NJ, soon purchasing a house on what was then the easternmost block of East Second Street, where he would remain for the rest of his life. They had two more children, and all three attended the Moorestown public schools. During his summer vacations, Ed took the family on fondly remembered camping trips, on road trips between Florida and Canada. With his degree in Mechanical Engineering, Ed spent most of his professional life working for oil companies, first Atlantic Richfield and then Sun Oil, becoming Chief Engineer of the Sun Pipeline. He held that position until his retirement, which he took early, in 1987, allowing him to travel with Anne more widely, and pursue his lifelong passion: golf. Anne Hazard White died in 1992. Ed subsequently married Rebecca Champion McDonnel at the end of 1993. When not traveling they lived together in the house on East Second Street, which they extensively remodeled and improved. They were both avid bridge players, and their socializing often revolved around that serious game. Another focus of friendships and commitments was the United Methodist Church of Moorestown. Ed's love of golf was legendary, and his skill considerable. He was a longtime member and past president of The Moorestown Field Club. In later years he represented the United States in Super Senior tournaments ranging as far as South America and Europe. He played avidly into his nineties, when health problems halted his pursuit. Ed is survived by his loving wife Rebecca, three children, Douglas H. White (Patty) of Sandwich, NH, Nancy White Dickinson (Michael) of New Harbor, ME, and Dr. Lawrence H. White (Neera) of Fairfax VA, seven grandchildren, three great grandchildren, and dozens of nieces and nephews and their descendents. He will also be missed by his stepdaughter Marthe McDonnel Neill (James) and their children, with whom he was very close. "He looked for the best in others and gave the best that he had." A Memorial Service will be held on Saturday, April 24, 2021 at 11:00 AM at the First United Methodist Church of Moorestown. In lieu of flowers, donations may be made to The United Methodist Church of Moorestown, 444 Camden Ave., Moorestown, NJ 08057.

Edward McCole White, 95, passed away peacefully on March 10 in Moorestown, NJ, in the home where he had lived for almost 70 years. Ed White was born in 1925 in Nansuchow, Anhwei Province, China, the fourth child of Henry Harrison White and Irma... View Obituary & Service Information

The family of Edward M White created this Life Tributes page to make it easy to share your memories.

Edward McCole White, 95, passed away peacefully on March 10 in...

Send flowers to the White family.