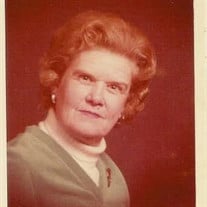 Elizabeth M. Yoos, 98, of New Paltz, New York, formerly of Ship Bottom and Mount Holly, New Jersey, passed away peacefully in her sleep on Thursday, August 8, 2019, at Woodland Pond in New Paltz, New York. Born September 2, 1920, in Mount Holly, New Jersey, she was the daughter of the late Logan Brown Morris and Oleathea Sickles (West) Morris of Mount Holly. On April 4, 1943, at the First Baptist Church of Mount Holly, New Jersey, she married Edward F Yoos. They enjoyed 32 years of marriage before his death on February 12, 1975. “Betty” was a very active volunteer and devoted member of the community throughout her long life. She grew up on her family’s farm on Jacksonville Road, Mount Holly and graduated with the very first senior class of Rancocas Valley Regional High School in 1938. Following her graduation from Trenton State Teachers College, now The College of New Jersey, she began her teaching career of more than 30 years and married. Her teaching was interrupted briefly to become a mother to their newborn daughter while her husband served overseas in World War II. Later “Betty” stayed home again to be with their baby son. “Betty” was a lifelong and very active member of The First Baptist Church of Mount Holly. She helped her parents in their later years. After her children were established with their lives, she and her husband purchased a house at the New Jersey seashore for special family gatherings. Following her husband’s death and later her retirement from Mount Holly Public Schools, “Betty” sold her home in Mount Holly and moved to her home at the seashore. All the while, “Betty” continued her involvement with her church and her work with the Mount Holly Women’s Club, Eastern Star, and the historic Smithville Mansion. She traveled and entertained her dear family and friends extensively. She continued to live in her home at the seashore until preferring the extra help and support of the wonderful staff at Woodland Pond’s Skilled Nursing facility for her last 11 months. In addition to her parents and husband, “Betty” was predeceased by her brother, Logan Brown Morris Jr. and sister-in-law Elizabeth S. Morris of Mount Holly. Survivors include her children, Barbara Stratton and her husband, Charles of New Paltz, New York and Paul Yoos and his wife Linda of Wichita, Kansas. She is also survived by five grandchildren and five great grandchildren. Her grandchildren are: Amy Janso and her husband, John of Ellenville, New York, Jill Libby and her husband Jay of Melrose, Massachusetts, Jeanne Deyo and her husband, Keith of Bethel, Connecticut, David Yoos of Wichita, Kansas, and Jonathan Yoos and his wife, Sabrina of Groton, Connecticut. Her great grandchildren are: Troy Deyo of Bethel, Connecticut, Ian Libby of Melrose, Massachusetts, Quinn Deyo of Bethel, Connecticut, Malcolm Yoos of Groton, Connecticut, and Elizabeth Yoos of Groton, Connecticut. Loving extended family and friends all brightened “Betty’s” life by surrounding her with calls, visits and love through all her life, She will be greatly missed and remembered. Friends and relatives may call on Saturday, October 26 from 12-1 PM at Perinchief Chapels, 438 High Street, Mount Holly, NJ. Service will follow at 1 PM. Interment will immediately follow at Mount Holly Cemetery. In lieu of flowers, contributions in memory of “Betty” may be made to any of the following: The First Baptist Church of Mount Holly, 1341 Woodlane Road, Easthampton NJ 08060, Deborah Hospital, 200 Trenton Road, Browns Mills, NJ 08015 or Susan G Koman, Walk for a Cure, Dept 41831, PO Box 650309, Dallas TX 75265.

The family of Elizabeth M. Yoos created this Life Tributes page to make it easy to share your memories.

Send flowers to the Yoos family.