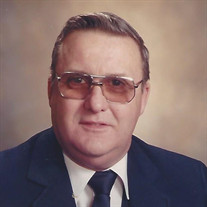 Ernest Jacob Greenwald, Sr. (Ernie), 89, of Lumberton, NJ, passed away at home surrounded by his loving family on January 14, 2021. Born in Lumberton in his parent’s house on September 23, 1931, Ernie was a 1949 graduate of Mount Holly High School in the business curriculum, and excelled in typing with 100+ words a minute on a manual typewriter. He was hired by the newly formed Burlington County Bridge Commission as a cashier. As the Korean War progressed, he was drafted in the Army in 1952. With his typing skills, he was assured that he would not leave the States; however, after being selected for Officers Candidate School, he declined a commission as an officer and was sent to an engineering battalion 1 mile South of the 38th parallel. As a Corporal, he worked for the Battalion Commander in Headquarters Company. When he had earned enough credits to go home, he was told that unless he found a replacement typist, he was going to stay. He found someone with limited skills, and for the next two weeks did both his own work and the that of the new typist. He was finally released to go home, and has often said that his replacement is probably still there. When he came home in 1954, he was encouraged by his wife to join the local fire company, Lumberton Fire Co. #1. It proved to be the beginning of an awesome career. While still working for the Bridge Commission, he became Chief of the fire company for 9 years, then the fire marshal of Lumberton Township. He served as Assistant Burlington County Fire Marshal for 11 years. In 1967, he was elected Executive Committeeman to the New Jersey State Fireman’s Association (NJSFA) representing Burlington County, a position he held for 10 years. In 1977, he was elected Vice-President of the Association. In 1983, he retired from the Bridge Commission as Executive Assistant to the General Manager and Purchasing Agent with 34 years of service. He was elected President of the NJSFA that same year, a position he held for 11 years. During his tenure, he brought many changes and improvements to the office and the Association, and was instrumental in working with the Five Mile Beach Association and the NJ Sports and Exhibition Authority to build the new convention hall in Wildwood. When he retired in 1994, he was elected President Emeritus, a position that he held until his death. Along with his 54 years in the NJSFA, he was involved in many other Fire organizations, including the Burlington County Fire Chiefs Association, member and former Recording Secretary of the Eastern Fire Chiefs Association, member and chair of the Volunteer Committee of the International Fire Chiefs Association and Life member of the Five Mile Beach Association. Preceded in death by his parents, Jacob and Bessye Gladys Greenwald (nee Matthews), his daughter, Terri Lynn Greenwald, his sister Doris Bradshaw, and his brother, William “Bunk” Greenwald, he is survived by his wife of 69 years, Joan; two sons, Scott (Angela) and Jake (Valerie); his daughter-in-law Lisa Bryant; his niece Debbie Moorer (Stephen); and three grandchildren, Jon Greenwald, Josh Greenwald, and Christopher Moorer. Funeral Services and Burial will be held privately on Friday, January 22, 2021. A live stream of events may be viewed on the Perinchief Chapels Facebook page beginning at 10:30 on Friday. A Memorial Service will be held at a later date. In lieu of flowers, contributions in Ernie’s memory may be to the Lumberton Fire Department. www.perinchief.com

The family of Ernest Jacob Greenwald Sr created this Life Tributes page to make it easy to share your memories.

Send flowers to the Greenwald family.