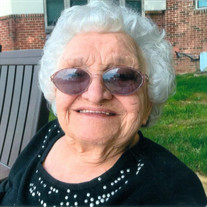 Florence (nee Polkosnik) Sucheski of Burlington, NJ formerly of Scranton, PA, died peacefully on Wednesday, June 10, 2020 at the Masonic Home in Burlington, NJ. She was 96. She was preceded in death by her beloved husband Victor Sucheski who died on April 17, 2004. She was born in the Greenwood section of Moosic on Nov. 7, 1923, the daughter of Vincent and Pauline (nee Mushiska) Polkosnik. She was a graduate of Minooka public schools and was justifiably proud of the American Legion award she received for academic excellence. Of strong Roman Catholic faith she was a lifelong member of SS Peter and Paul Church in West Scranton until relocating in her later years to be near her daughter. Floss was a woman who was always in a good mood. Even in her later years when her memory became a challenge and she was unable to walk, she still enjoyed a good story and a good chuckle, never once complaining. The only negative comment she ever made was “old age doesn’t come alone” delivered with a smile. She is survived by her daughter and caregiver Arlene Baldwin and her husband Marc of Southampton, NJ, her son Dr. Victor Sucheski and his wife Mary Lou of Fair Oaks, CA; her grandchildren Brian (Moira), Jeff, and Christopher (Marisa) Baldwin, Laura, John, and Steven Sucheski and great-grandchildren, Will, Avery, Luke, and Eugene Baldwin; sisters, Stasia Wzorek, Jean Zyatt, and Dorothy Tippett, all of Moosic; as well as many nieces and nephews. She is preceded in death by three brothers Walter Muraski, Edward Polkosnik, and Mark Zielinski and a sister, Mary Bogus. We would like to extend our sincere appreciation to the entire staff of Masonic Home who treated mom with compassion and love throughout her 5 years there especially Katie, Astride, Leslie, Harriet, and way too many others to list by name. Special thanks as well to Kyle and the Hospice staff who made her last weeks peaceful. Due to Covid19, funeral services and interment will be private. Arrangements are under the direction of Perinchief Chapels, Mt. Holly, NJ. www.perinchief.com

Florence (nee Polkosnik) Sucheski of Burlington, NJ formerly of Scranton, PA, died peacefully on Wednesday, June 10, 2020 at the Masonic Home in Burlington, NJ. She was 96. She was preceded in death by her beloved husband Victor Sucheski... View Obituary & Service Information

The family of Florence P. Sucheski created this Life Tributes page to make it easy to share your memories.

Send flowers to the Sucheski family.