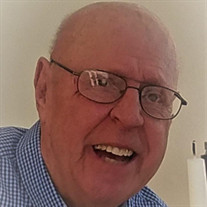 Frank Gardner, 89, of St. Michaels, MD passed away on March 31, 2020 at Heartfields in Easton, MD. Frank was born on September 28, 1930 to Charles and Edna (Dieroff) Gardner in Philadelphia, PA. When Frank was 10 years old, he moved with his family to Mt. Holly, NJ. He graduated from Rancocas Valley Regional High School in 1949, where he met the love of his life, Betty (Prickett) Gardner, who was his devoted wife for 68 years. At an early age, Frank’s working career started at “The Cup” in Mt. Holly, NJ. His parents then built “Gardner’s” restaurant in Moorestown, NJ, where he worked until the age of 19. He then went to work for Burlington County Farmer’s Coop., which became Agway, Inc. Over the years, he managed several Agway stores in New Jersey. In 1972, Frank moved his family to Maryland, where he became District Manager of the Delmarva Peninsula for Agway. After working for Agway for 35 years, his career continued as Park Superintendent for Queen Anne’s County Parks and Recreation in Centreville, MD, retiring at the age of 70. Frank loved his homes and took much pride in his beautiful lawns and gardens. He enjoyed traveling, boating, fishing, golfing and especially watching his grandchildren play sports at Queen Anne’s County High School. In addition to his working career, Frank served in the NJ National Guard in Camden, NJ for six years. He was also a committee member of the Westhampton Township and served on the school board for Westhampton, NJ. Frank is survived by his wife Betty, brother Charles of Medford, NJ; his sons, Gary (Joanne) Gardner of Medford, NJ and Clint (Gale) Gardner of Payson, AZ; his daughter, Tracy (Scott) Wagner of St. Michaels, MD; his grandchildren, Shane (Meredith) Gardner of Medford, NJ, Shelly (Anthony) Mongeluzo of Medford, NJ, Logan (Jordan) Higgs of Centreville, MD, Quin Higgs and her fiancé (Richard Warner) of Moorestown, NJ, Bobbie Jo Higgs of Dover, DE, and Robert Higgs of Rolling Fork, MS; and his great-grandchildren Ally, Ashley, Robert Bowen, Brent and Ethan. Frank is preceded in death by his parents and his brother, William Gardner of Mt. Holly, NJ. Per Frank’s wishes, all services will be private. Donations may be made to: Talbot Hospice Foundation, Inc., 586 Cynwood Drive, Easton, MD 21601.

Frank Gardner, 89, of St. Michaels, MD passed away on March 31, 2020 at Heartfields in Easton, MD. Frank was born on September 28, 1930 to Charles and Edna (Dieroff) Gardner in Philadelphia, PA. When Frank was 10 years old, he moved with his... View Obituary & Service Information

The family of Frank Gardner created this Life Tributes page to make it easy to share your memories.

Send flowers to the Gardner family.