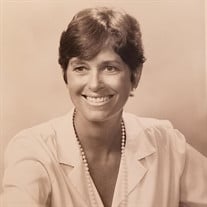 Gail L. Houlihan, age 85, passed away on June 3 at her home in Columbus, NJ after an extended period of illness. Gail was born September 15, 1936 in Mount Vernon, NY to Fred and Burniece Cordes, later Phillips, and was raised by Burniece and her husband and Gail’s beloved stepfather, Bill Phillips, in Westmont, NJ. She was a longtime New Jersey resident, having lived in Columbus since 2013, and before that in Bordentown and Beach Haven. She owned a summer home on Long Island, Maine - a place she loved dearly ever since first visiting with family there as a young girl. Gail attended Haddonfield Memorial High School (Class of ‘54) and was a 1958 graduate of Douglass College, where she majored in English. After college she worked for Doubleday Publishing in the Executive Management Trainee Program in New York City and later as a fourth-grade teacher in the Pennsauken, NJ school system. In 1959 she married the late Raymond D. Houlihan, Jr. and in relatively short order found herself happily raising five children and, ultimately embarking on a lifetime of service to her community and beyond, with a particular devotion to child advocacy. Gail achieved much in her life, but was most proud of raising her five children and, in later years, being a doting “Grammy Gail” to eight grandchildren. She was president of the Peter Muschal School PTA, president of the Junior League of Greater Princeton, a League of Women Voters leader and was an active Douglass College alumna, having received the Margaret T. Corwin Award for Service in 2013. She was elected to the Bordentown Township Committee from 1983 to 1988 and served as the town’s first woman Mayor in 1986. Gail then gravitated toward what would become her major focus: advocacy for children in foster care. One of her signature achievements occurred in 1978, when she helped establish New Jersey’s Child Placement Review (CPR) system, which relies on volunteers in the Family Courts to ensure that children in foster care find a permanent home in which they can grow and thrive. Gail’s service to CPR continued through the years, as she was a longtime member of the Burlington County CPR and an emeritus member of the statewide CPR Advisory Board, which she chaired for two terms. Gail was recipient of the prestigious New Jersey Governor’s Jefferson Award for her service to youth in 2016. In 2016 she was also honored with the Haddonfield Memorial High School Alumni Society Lifetime Achievement Award. Among Gail’s many other accomplishments and honors: Member & District Representative - Long Island (Maine) Civic Association; Founder, Chair and Co-Chair, Board of Trustees Member - Community Service Board of Morris Hall/St. Lawrence Rehabilitation Center (Trenton, NJ); Governor’s Committee for Children, Youth and Families (1978- 1982); Governor’s Health Planning Board Member (1994 - 2003); Charter Study Commission (elected) - Beach Haven, NJ (2008 - 2009); Junior League NJ State Public Affairs Committee (1978 - 1980), Vice-Chair (1978); Advocates for Children of New Jersey (ACNJ), Board Member (1978 - 2015), Treasurer (1989 - 1991, Administrative Vice President (1995 - 1997), Chair, Development and Board Secretary (2006 - 2011). She is survived by her longtime companion, Ernest Dorisio, four sons, Jeffrey J. Houlihan, R. D’Arsey (Jill Granat) Houlihan, Michael W. (Yvette) Houlihan and Sean P. Houlihan; a daughter, Pamela L. Firestone and her partner, José Alcala; and eight grandchildren: Jake, Bradford, Andrew, Madeline, Nate, Will, Garrett and Brendan - as well as countless friends, including close family friend Peter M. (Alison) Dolan. Burial will take place in Portland, ME later this summer. A celebration of Gail’s life is planned for October 8 at St. Mary’s Church in Bordentown. In lieu of flowers, it is respectfully requested that donations be made in Gail’s name to: Advocates for Children of New Jersey 35 Halsey Street Newark, NJ 07102 https://acnj.org/donate/ Long Island Civic Association PO Box 307 Long Island, Me, 04050 https://www.longislandcivicassociation.org/ Associate Alumnae of Douglass College 181 Ryders Lane New Brunswick, NJ 08901 https://www.douglassalumnae.org/MakeAGift/

Gail L. Houlihan, age 85, passed away on June 3 at her home in Columbus, NJ after an extended period of illness. Gail was born September 15, 1936 in Mount Vernon, NY to Fred and Burniece Cordes, later Phillips, and was raised by Burniece and... View Obituary & Service Information

The family of Gail L. Houlihan created this Life Tributes page to make it easy to share your memories.

Send flowers to the Houlihan family.