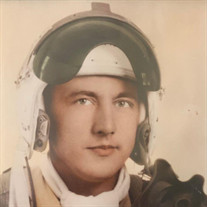 George Mathew Fedor, of Eastampton, passed away on March 7, 2021 at the Cambridge Rehabilitation Center, he was 90 years old. Son of the late George and Margaret Fedor, George was born April 13, 1930 in Lorain, OH. George enlisted in the United States Air Force right out of high school, where he proudly served his country for over 20 years. While in the Air Force George became a pilot and participated in Operation Safe Haven, also known as Operation Mercy, a refugee relief operation following the Hungarian Revolution of 1956. George was featured in an article in National Geographic magazine about this mission. In 1956, while attending a dance at Falcons Polish Dancehall in Trenton, NJ George met the love of his life Helen Grygon and after a short engagement were married that same year. Once married, George and Helen moved to various countries while George was still enlisted. After retiring from the US Air Force in 1968, the Fedor family remained in Eastampton where George worked as a Life Insurance Agent with Kansas City Life until his retirement in 1992. George loved to build and fly model airplanes, as well as going fishing and playing golf. He is a member of the American Legion, was a former member of the Mount Holly Rotary and was a longtime parishioner and former Usher of the Sacred Heart Roman Catholic Church in Mount Holly. George is survived by his loving wife of 65 years Helen (nee Grygon), his children David (Marguerite) Fedor, Thomas (Brenda) Fedor, Mary Raynor, Barbara Fedor, and Paul Fedor, his grandchildren Sarah, John, Brad, Brett, Jay, Stephanie, and Christina, his sisters Mary Ann Grygon, Susan Dzbenski, and Roberta Herron, as well as many nieces and nephews. Friends and Relatives may visit with the family from 9am-10am on Monday March 15 at Perinchief Chapels, 438 High Street Mount Holly NJ, 08060. A Mass of Christian Burial will follow the viewing at 10:30am at the Sacred Heart Roman Catholic Church, 260 High Street, Mount Holly NJ 08060. Burial at Brig. Gen. William C. Doyle Memorial Cemetery. In lieu of flowers, the family requests donations be made to the Society of Vincent de Paul, c/o Sacred Heart Roman Catholic Church, 260 High St., Mt. Holly, N.J. 08060 Due to Covid19, funeral guests are required to wear facial coverings and follow all health guidelines.

George Mathew Fedor, of Eastampton, passed away on March 7, 2021 at the Cambridge Rehabilitation Center, he was 90 years old. Son of the late George and Margaret Fedor, George was born April 13, 1930 in Lorain, OH. George enlisted in the... View Obituary & Service Information

The family of George Mathew Fedor created this Life Tributes page to make it easy to share your memories.

Send flowers to the Fedor family.