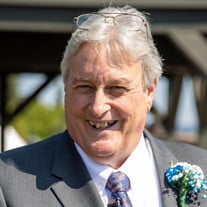 Gerald Ray “Jerry” Pfaff graduated into Glory on September 16, 2021 in Mt. Holly, New Jersey. A memorial service will be held to celebrate his extraordinary life on Saturday, October 23, 2021 at 2:00pm at Fellowship Community Church in Mt. Laurel, New Jersey. The viewing and visitation will be held that morning at Perinchief Chapels, 438 High St., Mt. Holly, NJ, from 9:00am to 12:00pm on Saturday, October 23rd. Jerry was born in 1954, in Washington D.C. and raised in Camp Springs, Maryland. He graduated from Crossland High School in Temple Hills, MD, class of ’72, and attended the University of North Carolina at Chapel Hill, receiving his Bachelors of Arts in Education in 1976. Jerry taught high school math and attended Trinity Evangelical Divinity School, graduating in 1982 with a Masters of Divinity, in preparation to go to Papua New Guinea as a Bible translator with Wycliffe Bible Translators. When Jerry was 18 years old at Greenwood Hills Camp he met his future wife, Susan, and the two of them married on August 18, 1979. They joined Wycliffe Bible Translators in 1985, and after linguistics training in Duncanville, Texas, moved overseas in 1987 to Papua New Guinea, where they began a 34-year ministry of Bible Translation among the Nali people of Manus Island. In March of 2020 they held a dedication celebrating the publishing of half the New Testament, as well as the release of the Luke video and Scripture audio recordings, all in the Nali language. During his tenure with Wycliffe, Jerry served the Papua New Guinea Branch of the Summer Institute of Linguistics (SIL) in various roles and capacities, and led the Nali translation team as trainer and advisor. At the SIL Ukarumpa Centre Jerry was known for his abounding hospitality, his musical giftedness with vocal, guitar, piano, and musical theater performances, and his leadership aptitude. He was also an incredibly gifted preacher, with one of his most notable sermons being a full recitation from memory of the Sermon on the Mount, from the Gospel of Matthew, chapters five through seven. One of Jerry’s favorite pastimes was playing rounds of Frisbee golf with his sons and friends at Ukarumpa. Jerry had a deep love for the Word of God and the souls of men, devoting his life to both in his 34 years of tireless service to the people of Papua New Guinea. He also loved to travel, and would drive extensively on his furloughs in the United States to visit friends, family, and supporters. In his later years he took great pleasure in sharing a meal with as many of his friends as possible and telling them about the work God was doing among the Nali people. He also delighted in reading the Hardy Boys books aloud to his grandsons every evening before their bedtime, often over FaceTime. He is leaving a massive godly legacy. Jerry is survived by his beloved wife, Susan Pfaff of Mt. Holly, NJ; his cherished mother, Juanita Pfaff of Rosemont, PA; his daughter and husband, Julie and Ben Quine of Dallas, TX, together with their three sons Andrew, Luke, and Peter; his son and wife Matthew and Callie Pfaff, expecting baby, of Los Alamitos, CA; his son and wife Nathan Pfaff and Keely Vedanayagam of Los Angeles, CA; his brother and wife, Dale and Kippy Pfaff of Chambersburg, PA; his sister and husband, Terry and David Hosan of Havertown, PA; his brother and wife Bruce and Sherri Pfaff of Owings, MD; and his father-in-law Richard Amber of Mt. Holly, NJ.

The family of Gerald "Jerry" Ray Pfaff created this Life Tributes page to make it easy to share your memories.

Send flowers to the Pfaff family.