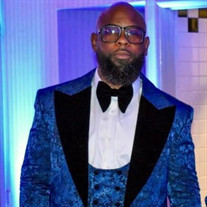 Gerald Alvin Watford Jr., 43, affectionally known as “Little Alvin” to his family and “Big Al” to his friends was born on January 2, 1979, in Willingboro, NJ. On Saturday, January 15, 2022, he was called home to be with the Lord. Alvin was the oldest of three children of Reverend Alvin G. Watford and the late Jacqueline Lee Watford. He always reminded everyone that he was “the oldest.” He was known as big brother, and protector to his sisters. Alvin was born and raised in Willingboro, NJ, attended Willingboro Public Schools, and graduated from Willingboro High School in 1998. Throughout his years he played baseball, basketball, and football. While in high school he grew to have a passion for football, and it became his first love. After graduating high school, he attended Community College in Toledo, Ohio. He went on to start his landscaping, tree, and snow removal company. Alvin also was a football coach for the Rancocas Valley Chief Football League. He had a great deal of pride knowing that he was coaching his sons. Alvin always felt the most fulfilled and happiest while spending time with his children, family, and friends. He loved to reminisce about old times, laugh, and eat good home cooked food. Whenever you saw him with a plate it was filled to capacity. Most recently he enjoyed going to breakfast at the Golden Dawn Diner where he would order turkey bacon, over easy eggs, and oatmeal with fresh fruit. He was a family man who loved creating memories with his two sons AJ and Aaron. The three of them shared a love for football, powerlifting, and he spent a great deal of time helping them perfect their craft. He had a beautiful spirit and anyone he met felt his kindness. He also took pride in his appearance and was always “sharp” when he went out. Alvin joins in heaven, his mother, Jacqueline Lee Watford. He leaves to honor his memory his children, Alvin Joseph (AJ) Watford and Aaron Devon Watford, his father, Reverend Alvin G. Watford (JoAnn), his sisters, Jacqueline Heather Watford, Melinda Stevens (Paris), his nieces, Paris Alycia and Mariah Stevens, aunts, uncles, cousins, and friends. We will miss you dearly Alvin, you will never be forgotten, you will always be in our hearts, and we will see you again. Funeral services for Alvin will be held on Saturday January 29 at 11am at Perinchief Chapels, 438 High Street Mount Holly, NJ 08060. Friends and relatives are invited to visit with the family from 10-11am prior to the service. Interment will be held privately.

The family of Gerald Alvin Watford created this Life Tributes page to make it easy to share your memories.

Send flowers to the Watford family.