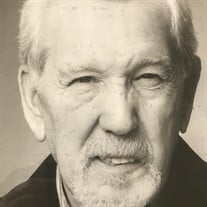 Harry Bergman passed away peacefully on September 16, 2019. He was 93 years old. Harry was born on the Lower Eastside of Manhattan on January 7, 1926. He served in the Navy during WW2 and was stationed in the South Pacific. After concluding his military service, Harry attended the prestigious Dramatic Workshop at the School for Social Research in New York City. In 1946, Harry officially began his professional acting career, working extensively across the stage and screen, appearing in countless theatrical performances, movies, television shows, and commercials. At the age of 91, with an amazing amount of grace and presence, he wrote and performed in a 6-act play, “An Actor’s Journey.” It was his final performance. A proud and active member of the Screen Actors Guild, Harry enjoyed sharing his knowledge and experiences, and was an inspiration to us all. In 1972, after traveling extensively and completing several consecutive seasons at the Arena Stage in Washington, D.C., Harry settled in Willingboro, NJ, where he lived with his wife until 2015. Harry is preceded by his amazing wife, Suzanne (Burtan), siblings Joe, Molly, and Pearl, niece Sandra, and cousin Bert. He is survived by the daughter of his heart, Cheri, her husband William, Jill and David, Bill and Kim; nieces and nephews: Janet, Eugene, Linda, Elaine, Robert and Marsha; cousins: Joyce, Craig and Kathleen, Cindy and David, and their daughter Anna, who Harry adored. Please join us in a celebration of the life of Harry Bergman on Sunday, October 27th 11 a.m. -1 p.m. at 276 New Freedom Road Southampton, NJ 08088. If you would like to make a gift in Memory of Harry Bergman, please visit the Actors Fund at www.actorsfund.org

Harry Bergman passed away peacefully on September 16, 2019. He was 93 years old. Harry was born on the Lower Eastside of Manhattan on January 7, 1926. He served in the Navy during WW2 and was stationed in the South Pacific. After concluding... View Obituary & Service Information

The family of Harry Bergman created this Life Tributes page to make it easy to share your memories.

Send flowers to the Bergman family.