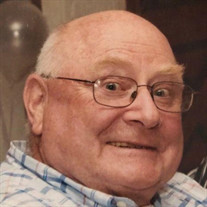 Herbert W. Jones, Jr., 75, of Lumberton passed away peacefully surrounded by his family on March 1, 2021. “Bert”, as his friends and family knew him, was a 1963 graduate of Rancocas Valley Regional High School, and earned a B.A. degree in Business Administration from Rutgers University in 1967. Bert spent most of his life working with his father, brother, and uncle in the family’s dairy farming business until his retirement in 2003. He was actively involved in many dairy farming related organizations and served on the Lumberton Township Planning Board. He enjoyed traveling, gardening, music, model trains, cheering for the Philadelphia sports teams, fishing, and spending summers with relatives on the beaches of Emerald Isle, North Carolina. However, Bert’s greatest love and proudest accomplishments were his family. His wife, three children, and six grandchildren are left to cherish his memory. Bert is predeceased by his parents, Herbert W. and Doris Jones, and his brother, Stephen H. Jones. Bert is survived by his wife of 53 years, Connie (Cramer), his three children Christy Gibbons (Bill), Kara VanNorden (Tad), and Craig Jones (Gina), along with six grandchildren, Kaylee, Duncan, Teddy, Cooper, Christopher, and Griffin. He will also be remembered by his brother-in-law, Charles Cramer, sister-in-law Lisa Jones, and two nephews, Christopher (Angela) and Aaron Jones. Relatives and Friends may visit with the family on Friday evening from 4-6pm at the Perinchief Chapels, 438 High St., Mount Holly. Memorial services and Burial in Medford Friends Meeting Cemetery will be held privately. In lieu of flowers, contributions in Bert’s memory may be made to the charity of the donor’s choice. www.perinchief.com

The family of Herbert W Jones Jr created this Life Tributes page to make it easy to share your memories.

Send flowers to the Jones family.