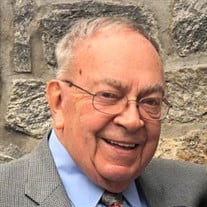 Herman Eickhoff 90, of Lumberton, NJ, former CEO of Eickhoff Supermarkets of Burlington County, passed away on May 20, 2020, after a short illness, with his loving family by his side. Born in Philadelphia and a graduate of Frankford HS, he spent his entire career in the retail food industry, initially as part of Schaaf’s Market/Shop’n’Bag with his father and brother’s- in- law, opened one of the first independent supermarkets in Levittown, PA in 1955, and moved the family business to Burlington County, NJ in 1968. He partially retired in 2000 as the CEO of what is currently the 4th generation family-owned Eickhoff Supermarkets, who currently operate ShopRite supermarkets in Burlington, Cinnaminson, Delran, Hainesport and Mt. Laurel. Herman was a true ‘Renaissance’ man who enjoyed a full life. A proficient musician, singer and painter, the man loved to dance. He was also an avid hobbyist his entire life, including numerous model train platforms, RC airplanes and ship models built over the years. His most notable model creation was an 8 ’ authentic replica of the Titanic, scaled from plans, that took 3 years to finish . He also enjoyed traveling with his childhood sweetheart and wife of 70 years, Barbara Schaaf Eickhoff, enjoyed spending time at the Jersey Shore with family and friends and following the Phillies and Eagles local sports teams. Herman is survived by his devoted wife Barbara (nee Schaaf), 3 children, Karl Eickhoff (Pamela), Richard Eickhoff (Deborah), and Janice Sporn (Clifford); 7 grandchildren, Kristen Dixon (Mike), Geoffrey Eickhoff (Kristy), Joseph Eickhoff, Daniel Eickhoff, Jessica Hughes (Andrew), Heather Sporn and Christopher Sporn (Michelle); and 12 great- grandchildren. All in all, a fun loving Father and Pop-Pop. Services will be private on May 27, 2020 through Perinchief Chapels, Mt. Holly, NJ with interment at Sunset Memorial Park. A memorial service will be held at a later date. In lieu of flowers, contributions in his memory may be made to either Smile Train (www.smiletrain.org/donate) or St Andrews Episcopal Church, Mt. Holly, NJ (www.standrewschurch-mh.org)

Herman Eickhoff 90, of Lumberton, NJ, former CEO of Eickhoff Supermarkets of Burlington County, passed away on May 20, 2020, after a short illness, with his loving family by his side. Born in Philadelphia and a graduate of Frankford HS, he... View Obituary & Service Information

The family of Herman Eickhoff created this Life Tributes page to make it easy to share your memories.

Send flowers to the Eickhoff family.