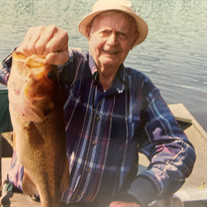 James C. Wigley, Sr. of Hainesport, passed away suddenly on Tuesday, November 30, 2021 at his home. He was 83. James was born in Hazlehurst, Georgia to Clyde and Christine Wigley. James was predeceased by his siblings, Dwight, Dewey, Charlie and Madelyn Grey. James is survived by Johanna (nee Panella) his loving wife of 61 years, and a large extended family including his brother in law Joseph Panella Jr. (Carol), their sons Christopher and Timothy (Tracy) and his six sons; Kenneth, Glenn (Kathleen), Kevin, Craig (Melissa), James Jr. (Gigi) and Darren. James was also blessed with nine grandchildren; Kyle, Stephanie, Justin, Michelle, Joseph, Daniel, Matthew, Jared and Lucas. James Wigley came north to New Jersey as a young man after enlisting in the U.S. Army and was stationed at Fort Dix. Though he put down deep roots in Southern New Jersey, he never forgot his Georgia roots and “Uncle Bo” leaves behind many loving nieces and nephews there including; Shelly Wigley, Shelia Anderson, Greg Wigley, Cindi O’Connor, Jeff Hulett, Gary Washburn, Mark Washburn, Sean Wigley, Mike Wigley, and Reverend Robert Wigley. James Wigley made his living as a chef, a skill he gained by way of his military service. Using his years of experience in the food service industry, for a time he taught future chefs at Burlington County Vocational & Technical School. But he never just had one job. Throughout his life, he would work 2 or more jobs in addition to his full time work, and all that in addition to his many years of Army National Guard service. James loved being outdoors and was an avid fisherman who enjoyed many successful bass fishing outings with his buddy Mike. He developed a love of fresh eggs courtesy of his friend Rick which may have appealed to his farmer’s soul. He loved to garden and though his garden had gotten smaller and simpler over the years, each spring he still looked forward to the day when he’d get his tomatoes and peppers in the ground. He enjoyed feeding the birds at the variety of feeders in his backyard with his beloved “Granddog” Angel always by his side. Though a chef by trade, James was truly a “Jack of All Trades” and no home improvement job was too big, too intimidating or too complex for him to take on. His hands were the hands of a born tinkerer and bore the scars and callouses of years of hard physical work. His prowess as an amateur lumberjack, electrician, plumber and auto mechanic is legendary. Finally – as a husband, father, grandfather, uncle and friend, We are proud of the man you were and will always be in our hearts. You lived your life to the fullest your way, the only way. We will forever love you and your passing has left a big void in our lives. You are at peace and free from the earthly troubles and pain. Rest well; until we meet again. Services and interment are private. In lieu of flowers, memorial donations can be made in James’ memory to: Burlington County Veterans Services, 795 Woodlane Rd., Westampton, NJ 08060 (Please write in memo “James Wigley - Special Event Account”.

James C. Wigley, Sr. of Hainesport, passed away suddenly on Tuesday, November 30, 2021 at his home. He was 83. James was born in Hazlehurst, Georgia to Clyde and Christine Wigley. James was predeceased by his siblings, Dwight, Dewey, Charlie... View Obituary & Service Information

The family of James C. Wigley Sr. created this Life Tributes page to make it easy to share your memories.

Send flowers to the Wigley family.