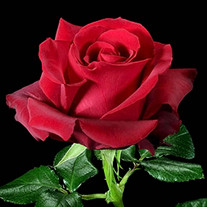 Jeannine Teresa Leary, 94, died in her home on November 8, 2019. She was surrounded by her loved ones who will miss her deeply. Jeannine was born on December 28, 1924 in Nice, France. She was the fourth child of Paul Fevrier, and her beloved mother, Marie Rose Guiglaris. After her mother’s death in 1936, she was raised by her grandmother, Antoinette Guiglaris (nee Toselli). At the end of WWII, Jeannine found herself working in a hotel for American soldiers alongside her soon to be husband, Lieutenant Warren F. Leary, Jr. In 1947 she moved to the United States where she married Warren and made her life. Jeannine was kind and considerate. She loved her family and would do anything for them, especially her grandchildren and great-granddaughter, who all called her “Mamine”. Warren always said that while he preferred “wall to wall books”, Jeannine loved “wall to wall people” – and it was true. She had a great many friends, and always planned events and parties. Jeannine approached life with a “joie de vivre” that even made ordinary things a celebration. She honored her French heritage by cooking French cuisine, hosting French holidays, and participating in local French clubs. Her hobbies also included painting, needlepoint, knitting, and sewing. Jeannine is survived by her four children, Warren (Lisa), Patrick (Jan), Michela Bova (Michael), and Linda, 4 grandchildren, Alanna, Caitlin (Shane), Warren, and Evan, 1 great-granddaughter, Sarina, and additional family, Bonne and Doug Nice and their twins Cynthia and Doug. She is also survived by a sister, Ginette, a brother, Andre, 4 nieces and nephews, Nikki Cafiero (Martine), Elyane Fisbach (Jean-Pierre), Philippe Cafiero (Lawrence), Thiery Fevrier, and Odile Kendrick, as well as great nieces and nephews, Stephen, Virgine, Julien, Sandra, Vincent, Lauren, Ashley, Christopher, and Brooke. She is also survived by her beloved cat, Minou. She was preceded in death by her brothers Francis Fevrier and Henri Fevrier. Calling hours will be held on Thursday, November 14, 2019 from 9am to 11am at Perinchief Chapels 438 High St., Mount Holly. Funeral services will begin at 11am at the funeral home. Interment will be held privately. In lieu of flowers, memorial contributions can be made to the Voorhees Animal Orphanage (vaonj.org). www.perinchief.com

Jeannine Teresa Leary, 94, died in her home on November 8, 2019. She was surrounded by her loved ones who will miss her deeply. Jeannine was born on December 28, 1924 in Nice, France. She was the fourth child of Paul Fevrier, and her beloved... View Obituary & Service Information

The family of Jeannine Teresa Leary created this Life Tributes page to make it easy to share your memories.

Send flowers to the Leary family.