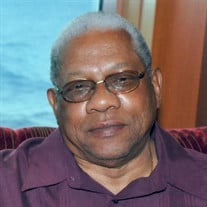 On Sunday the 14th day of February 2021, Jerome F. Hurley passed away at Virtua Memorial Hospital, Mt. Holly. Jerome was born and raised in Brooklyn, NY on June 15, 1936; the son of the late Kenneth Franklin and Edna May (nee Spruel) Hurley. He was the brother to the late: Gloria Hurley, Kenneth Hurley II, Bernard Hurley, and Stanley Hurley. Jerome performed a service for his country in the Air Force for a total of 20 years during the Vietnam War. He received many accomplishment awards and particularly a commendation medal that he received upon his retiring. Thereafter, Jerome entered the workforce for the Delaware River Port Authority in which he also retired from. He was a member of the American Legion and an active member of the Sacred Heart Church in Mt. Holly. Jerome loved the time he had with his military brothers and raising his grandsons. He also enjoyed fishing, watching tennis, and he was an avid Philadelphia Eagles fan. Jerome meant a great deal to his family and friends. He was the quantum of solace that instilled positive morality amongst us all. During his enlistment he met his wife Christinna Van Dams and married in October of 1965. Together they raised three children, daughter Monique, adopted Godson and nephew Wayne, and adopted nephew Rudi. Jerome is survived by his wife of 55 years, Christinna; daughter, Monique Hurley-Bailey, adopted Godson and nephew Wayne Hurley, adopted nephew Rudi Pangad; grandchildren Isaiah Charles, Elvon Charles, Micah Bailey, the late Arman Pangad, Rishan Pangad, Rudi Pangad Jr., Kirstin Pangad, and Cameron Pangad; nephews, Kenneth Hurley III and his wife Delois, and Vincent Hurley; niece, Griselda Hurley; great niece Chief Petty Officer Letitia McBride and her husband Senior Chief Petty Officer Sean and their son Hugh; cousins, Grace Howard, the late Jerry and Jerry Jr. Howard, Kim Howard, Roxanne Howard. Jerome had numerous nieces, nephews, great nieces, great nephews as well as beloved family friends that extends across the continent to The Netherlands and Suriname. He is also survived by a long list of close family friends, some deceased: the Flemings’s, the Groenhart’s, the Hills, the Lawrence’s the Thomas’s, the Victor’s, James Colman, James King and Bob Wilson. Relatives and friends may attend his viewing on Tuesday, February 23, 2021 from 9-10 A.M. at Perinchief Chapels, 438 High St., Mt. Holly. A Mass of Christian Burial will be celebrated at 10:30 A.M. at Sacred Heart Church, 260 High St., Mt. Holly. Interment to follow at Brig. Gen. Wm. C. Doyle Veterans Cemetery, Wrightstown. In lieu of flowers the family is asking that a memorial contribution can be made to St. Vincent de Paul Society, Sacred Heart Church, 260 High St. Mt. Holly, NJ 08060. We are asking that masks must be worn, and social distancing be observed. Zoom Meeting Starts at 9 AM on Tuesday, February 23, 2021 Meeting ID: 895 884 3508 Passcode: 067129

On Sunday the 14th day of February 2021, Jerome F. Hurley passed away at Virtua Memorial Hospital, Mt. Holly. Jerome was born and raised in Brooklyn, NY on June 15, 1936; the son of the late Kenneth Franklin and Edna May (nee Spruel) Hurley.... View Obituary & Service Information

The family of Jerome F. Hurley created this Life Tributes page to make it easy to share your memories.

Send flowers to the Hurley family.