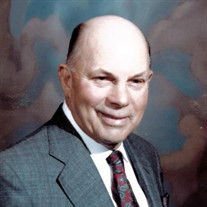 John Pew Jr. of Moorestown, passed away peacefully on Monday, April 13, 2020 at The Evergreens in Moorestown. He was 98. John was born October 17, 1921 on Maple Hill Farm, Woodlane Rd., Westampton, NJ. He was a lifelong farmer. He bought his Moorestown Farm in January of 1943 right after he and Barbara were married and named their farm “Meadow Brook Farms”. Over the years the farm in Moorestown, run by John and his two sons, had dairy and grew everything from turkeys, tomatoes for Campbell’s Soup, vegetables, wheat and soybeans. After living on the Moorestown farm for 50 years, it was sold to developers, and he and his wife moved into the Evergreens Retirement Community in Moorestown. John also farmed with his son, Harold, on his other farm in Westampton until he retired at 97. His motto was, “You need something to get up for in the morning in order to keep living.” Over the years, John had belonged to and led many agricultural organizations. He had been a member, national champion, and State President of the Future Farmers of America. He had also been a 4-H mentor, a longtime member of the New Jersey Farm Bureau and the Burlington County Board of Agriculture. He also was a former Republican Committeeman and a longtime member and field trial judge of the English Setter Club in Medford. John enjoyed riding his horse and running his English Pointer bird dogs. As for hobbies or other interests, the widower who lost his wife of 60 years, said, “I’ve got enough.” Indeed, a proud man with land to farm, some good humor, his children, grandchildren, and great-grandchildren, seemed to be all he needed. John is survived by his daughter Barbara Ann Pew Keefe, son John Scott Pew III and his wife Debbie, and son Harold M. Pew and his wife Donna; 6 grandchildren: Kristin Marie Montgomery, Colby Martin Pew, Jason Tyler Pew, Kelly Lynn Pew, Kimberly Marie Poli, and Brian Scott Pew; great-grandchildren: Connor Montgomery, Madison Montgomery, Tanner Pew, Whitney Pew, Annika Baumgardt, Avery Baumgardt, Olivia Drayton, Jax Drayton, Hunter Pew, Cooper Pew, and Laurel Pew. He is also survived by his wonderful friend, Susan Adams. Due to the Covid19 pandemic, a memorial service will be held at a later date. Contributions in Mr. Pew’s memory may be made to the Future Farmers of America at Northern Burlington High School, 160 Mansfield Road East, Columbus, NJ 08022.

John Pew Jr. of Moorestown, passed away peacefully on Monday, April 13, 2020 at The Evergreens in Moorestown. He was 98. John was born October 17, 1921 on Maple Hill Farm, Woodlane Rd., Westampton, NJ. He was a lifelong farmer. He bought... View Obituary & Service Information

The family of John Pew Jr created this Life Tributes page to make it easy to share your memories.

John Pew Jr. of Moorestown, passed away peacefully on Monday,...

Send flowers to the Pew family.