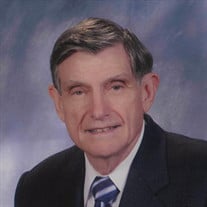 John A. Powell of Moorestown died on Thursday, December 31, 2020 at Samaritan Hospice at Virtual-Memorial Hospital in Mount Holly. He was 84 and a long-time resident of both Westampton and Willingboro. Born and raised in Los Angeles, he graduated from Washington High School and went on to receive a BS degree from the University of Southern California (USC) and a PhD in Organic Chemistry from the University of Washington (UofW). While at USC, he was a member of the Alpha Tau Omega fraternity and performed in both the 1955 Rose Bowl parade and Rose Bowl game as a member of the Trojan Marching Band. After graduation from UofW, he went to work for Rohm & Haas in their research departments in Bristol and Springhouse, Pennsylvania, where he developed processes for the manufacture of acrylic emulsions that improved the characteristics of Plexiglass, paints, adhesives, leather, etc. John was a member of St. Andrews Episcopal Church in Mount Holly since the early 1960s. He had served on the Church’s vestry for over 30 years. John was also a member of the Mount Holly Lions Club and an active volunteer in his community. John enjoyed traveling and has visited dozens of countries around the world, including Cambodia and Vietnam in 2019. He enjoyed listening to jazz, swing, big band, and traditional pop music and watching British television comedies and mysteries. While at USC, John met his wife, Margaret R. Helms (deceased), who he was married to for 49 years. He is survived by his son and daughter-in-law, John W. and Rossana of Mission Viejo, California and his son and daughter-in-law, James and Anna of Chino Hills, California. John is predeceased by his brother, Evan (Tom) Powell. He is also survived by two grandchildren, Nicole and James II and many nieces, nephews and friends. Funeral services will be broadcast live on both Zoom and Facebook from St. Andrew’s Episcopal Church in Mount Holly at 1 pm on Saturday, January 9, 2021 (see www.standrewschurch-mh.org for links). Interment will be at Rose Hills Cemetery, Whittier, CA. Contributions in his memory may be made to St. Andrew’s Memorial Fund, 121 High St., Mount Holly, NJ 08060.

John A. Powell of Moorestown died on Thursday, December 31, 2020 at Samaritan Hospice at Virtual-Memorial Hospital in Mount Holly. He was 84 and a long-time resident of both Westampton and Willingboro. Born and raised in Los Angeles, he graduated... View Obituary & Service Information

The family of John Alexander Powell created this Life Tributes page to make it easy to share your memories.

Send flowers to the Powell family.