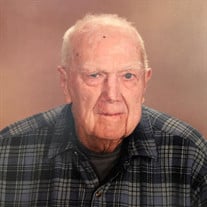 John W. Van Wagoner, 97, passed from his beloved earthly homestead to his heavenly home on Tuesday, January 18, 2022. Born a fourth-generation farmer in Oradell, New Jersey, John was a man who loved the land and his family. He graduated from Pennington High School in 1941 and attended Rutgers University until World War II brought him back home to work the family farm in Hopewell Township, Mercer County. In 1945, John contracted polio. Doctors said that he would never walk again. Yet with determination and great support from his family, he learned to walk again, step by step. In 1950, he noticed a newspaper photo of new agricultural agent Edith Whitlock and announced he would marry her. Thirteen months later, he did. Their family grew. In 1962, they bought a farm on Arney's Mount in Springfield Township, Burlington County, and everyone pitched in to make it work. In 1975, John’s dairy farming evolved into raising crops and selling filters for anything with a motor. “Mr. Filter Man” enjoyed connecting with others and meeting their needs. John was resourceful, deeply curious, and a person of faith. A thrifty handyman-mechanic, he improvised solutions to many mechanical problems—with baling wire, duct tape, and anything else on hand. Though typically a man of few words, he often peppered visitors with questions to learn as much as he could: how they saw the world, details of their work, their genealogy to add to the ever-growing database he kept as a hobby. A longtime member of the First Presbyterian Church of Mount Holly, John was a founding trustee of the Samuel Miller Christian Retirement Center and attended a weekly men's prayer breakfast. He is preceded in death by parents Warren and Anna Van Wagoner, wife of sixty years Edith and sister Dorothy Bryan. He is survived by children Elsie (Paul) Nicolette, Nancy Shafran/fiancé Doug Cunningham, David (Anne) Van Wagoner, Evelyn (Dean) Eachus, Janet (Tim) Rosenberger, seven grandchildren and four great-grandchildren. John’s memorial service—facemasks required—will be held Saturday, February 26 at 1:00 pm at First Presbyterian Church, 125 Garden Street, Mount Holly NJ 08060. If unable to attend, visit https://vimeo.com/event/1743816 for a video livestream. In lieu of flowers, you may contribute either to First Presbyterian Church at the address above or to your favorite charity. Arrangements by the Perinchief Chapels, Mount Holly

John W. Van Wagoner, 97, passed from his beloved earthly homestead to his heavenly home on Tuesday, January 18, 2022. Born a fourth-generation farmer in Oradell, New Jersey, John was a man who loved the land and his family. He graduated from... View Obituary & Service Information

The family of John W. Van Wagoner created this Life Tributes page to make it easy to share your memories.