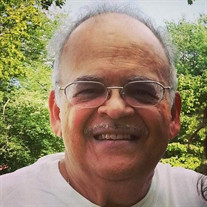 José Luis “Che-Güi” Parrilla, of Pennsauken, passed away on May 29, 2022. He was 78 years old. Born on September 9, 1943, José was born and raised in Vieques, Puerto Rico. At the age of 9, his family moved from Puerto Rico to Philadelphia. José met the love of his life Ana Ortiz at a church youth group dance at La Milagrosa church in Philadelphia, and married her at the age of 20. José moved with his wife to Willingboro, NJ in 1974 and eventually settled in Pennsauken with his family in 1988. José was a member of the St. Peters Parish in Merchantville and he also liked to attend Mass at Mary Queen of all Saints Church in Pennsauken, NJ. José was also a member of the Knights of Columbus. After retiring from the Small Business Administration, José enjoyed volunteering as a voting poll worker for the Democratic party and never missed an election. As an avid Philadelphia sports fan, Jose loved watching the Phillies and was a longtime season ticket holder for his beloved Eagles. He also enjoyed tinkering with cars and with anything computer or electronic. José was a cowboy at heart and loved to watch Western movies. José is survived by his beloved wife of 57 years Ana Parrilla, his daughters Anna Marie (Tom) Diaczynsky, Frances Giles, and Omaira “Omi” (Kalman) Dunne, his sons José Negron, Juan Parrilla, and Javier Parrilla, and his grandchildren Veronica Elizabeth 26, Lisa Reneé 21, Makayla 16, Isaiah 15, Emmanuel “EJ” 13, Izeera 12, Elena Lynn 6, Emilio Juan 4, and Elias José-Javier 2. José is predeceased by his mother Juanita Huertas-Davila. Funeral services for José will be held Tuesday June 7th at 11am at Perinchief Chapels, 438 High Street Mount Holly, NJ 08060. Friends and relatives are invited to attend José’s viewing on Monday June 6th from 6-8pm and from 10-11am on Tuesday June 7th prior to the beginning of the service. In lieu of flowers donations may be made in memory of José Parrilla to: ACM La Esperanza in Vieques, Puerto Rico. c/o Fellowship Alliance Chapel, 199 Church Rd, Medford, NJ 08055. *Any donations made, must mention “José Parrilla”

The family of Jose Luis Parrilla created this Life Tributes page to make it easy to share your memories.

Send flowers to the Parrilla family.