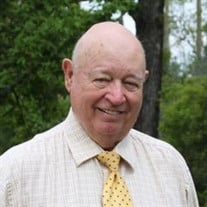 M. James (Jim) Mackenzie Jr. of Southampton went to be with the Lord on April 1, 2021 at the New Jersey Fireman’s home in Boonton NJ. He was 87 years old. Son of the late M. James Sr. and Pearl Mickle Mackenzie and sister of the late Peggy Mackenzie, Jim was born on September 1, 1933 in Camden NJ. He received a B.S in Natural Science from Muhlenberg College in 1957 and a M.S in Chemistry from the State College of New Jersey in 1969. Jim and his first wife Sally Park were married in July of 1960 and lived in Medford, NJ until moving to North Carolina in 1998. Sally sadly passed away after a marriage of 40 and half years. Later Jim married his second wife Peggy, a good friend of Sally’s and a Mount Holly native. Jim also enjoyed building model trains and boats and was a volunteer and member of the Friends of Maritime Museum in Beaufort NC. He was dedicated to Bible study and helping others. Fire service and teaching were Jim’s passion. He started his 41-year career in fire service in 1960 as a volunteer. He served as Fire Protection Engineer and Fire Chief for Merck & Co., Inc in Rahway, NJ from 1973-1988. After retiring from Merck, Jim went on to become the President and Founder of Teaberry Associates in Beaufort, NC, as Safety and Fire Protection Consultants. For over 39 years, Jim served as fire service instructor at various colleges including Jersey City State College, Rutgers University, and Coastal Carolina Community College. He was Chief Instructor of the Burlington County Fire Academy and for 10 years, published a magazine, Haz-Mat Technology. He is also a life member of the Taunton Fire Company in Medford NJ, where he previously served as Chief. Jim is survived by his loving wife Peggy (Atkinson Rush) Mackenzie and her children Allison (John) Heller and Tamah (Jason) Freni, step-grandchildren Josh, Seth and Brooke Freni, and first wife’s niece Bridget Patterson, and nephews John and Craig Park. Funeral services for Jim will be held privately at the request of the family. In lieu of flowers, donations may be made in Jim’s memory to the Red Lion Faith Chapel 118 Red Lion Road, Southampton NJ 08088, or to the Taunton Fire Department 631B Gravelly Hollow Road Medford, NJ 08055

M. James (Jim) Mackenzie Jr. of Southampton went to be with the Lord on April 1, 2021 at the New Jersey Fireman&#8217;s home in Boonton NJ. He was 87 years old. Son of the late M. James Sr. and Pearl Mickle Mackenzie and sister of the late... View Obituary & Service Information

The family of M. James Mackenzie created this Life Tributes page to make it easy to share your memories.

M. James (Jim) Mackenzie Jr. of Southampton went to be with the...

Send flowers to the Mackenzie family.