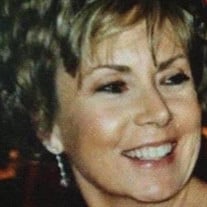 Margaret (Meg) B. Trout (Wroten) of Southampton passed away peacefully on Monday, January 17, 2022. She was 62. Meg was born in Philadelphia and raised in Southampton. She was preceded in death by her parents, Neil and Mary Wroten. A beloved Wife and devoted Mother and Grandmother (Ma Mia) she is survived by her loving husband of 38 wonderful years, Kenneth; her dear brother Neil (Mimi); her children, Scott (Melissa), Sean (Laura), Mary Kate (Brian); and her treasured grandchildren, Scott Jr., Haylee, Brian, Colin, Luke, and Jason; her beloved Mother-in-Law Susan Trout; lifelong friend Karen (Ray); and many cousins and friends. A devote Christian Meg loved being at church and felt at peace while being there. Meg’s love of life and determined (some would call stubbornness) spirit was immediately evident in the way she lived. She loved her animals, and boarded her horses at Alpine Farm in Burlington, NJ. She became like a granddaughter to “Pups” who was the owner and who instilled his strong German work ethic in her. She started to give riding lessons once a week and she progressed to eventually running the daily operations of the barn by the time she was 11. She continued to be very involved at Alpine Farm until she left for nursing school. She joined the Burlington 4-H and became a Junior leader of the Wandering Horsemen 4-H Club. Continuing to ride and enjoyed watching her children ride as well. She always knew she wanted to be a nurse from a very young age. She attended Helene Fuld School of Nursing and graduated with honors and began her career in Med Surg at Memorial Hospital in 1980. She then followed her true calling in critical care at Deborah Heart and Lung Center from 1986 to 1997. In retirement she continued to mentor future nurses and her daughter, Mary Kate, followed in her foot steps in 2011. After becoming a nurse, her next goal was to be married, and start a family. Meg and Ken met when she was 17 and she knew he was the one. They married in 1983 and shared a life of love and respect for 43 years on the farm called home. Meg was a devoted mother to her children raising her children and grandchildren to have extra love and making sure they were well taken care of. Meg with a kind word, a listening ear or a gentle touch was able to enter your life and become a special piece of it. If someone needed attention or care Meg was there with a kind words and gentle care to many. Meg spent many days at her father-in-law Joe, mother-in-law Sue and Joe Jr. and became a second daughter to them and cherished the times she spent with them. However, she still had more to give and so she gave back to her community. Meg devoted countless years to the Burlington County 4-H Equestrian Club in many various roles from judging, coaching, supporter, organizer, and chaperoning numerous trips. She was especially fond of being Chairperson of Equestrian of the Year Championship’s, coaching countless hours to many young riders to become just that “Equestrian of the Year” for many years. Meg enjoyed the long trips to Ocean City, with 20 or more kids. For the past 40 years Meg could be found at one of her two favorite places, either a horse show or the beach. There are many adults today who will remember Meg as a role model and mentor. Meg worked beside her husband for the American Culinary Federations -Professional Chefs Association of South Jersey where Ken is President and has held many other roles. Meg enjoyed her time serving as the Secretary for PCASJ, she worked tirelessly in as many ways possible for the chapter and the ACF national were she forged special relationships with many of her fellow colleges and also winning the Spirit of Aloha award If there were a title for an “and everything else” Meg would have certainly held that title as well. Meg was instrumental in the success of many, Presidents Balls, Chefs at the Shore and many other events in support of scholarships for young future chefs. She took special pride in making sure chef received awards on many levels. One of her greatest joys was when she could give back to others on many countless hours besides her friends at the National Outreach program and countless others programs in the good company of her friend Wolfgang, Maria, David and Jonnie, and the rest of the board members who meant the world to her. Her greatest joys in life were spending time with her family and friends. We were lucky to have had her as part of our lives, a beautiful soul that loved deeply, freely and always lit up a room with her welcoming smile. Friends and relatives may visit with the family from 3:00pm to 5:00pm Sunday January 23rd and again from 9:30am to 10:30am Monday January 24th at Perinchief Chapels, 438 High Street, Mount Holly, NJ 08060. Mass at Saint Andrews Church, 121 High Street, Mount Holly, NJ 08060, will follow at 11:00am. Burial will be held at Saint Andrews Cemetery following the Mass.

Margaret (Meg) B. Trout (Wroten) of Southampton passed away peacefully on Monday, January 17, 2022. She was 62. Meg was born in Philadelphia and raised in Southampton. She was preceded in death by her parents, Neil and Mary Wroten. A beloved... View Obituary & Service Information

The family of Margaret "Meg" B. Trout (Wroten) created this Life Tributes page to make it easy to share your memories.

Margaret (Meg) B. Trout (Wroten) of Southampton passed away peacefully...