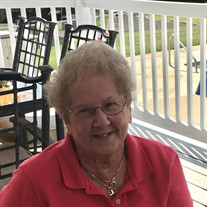 Marjorie E. Hall, of Southampton, passed away on Tuesday, January 18, 2022. She was 83 years old. Marge was a proud Piney (“from her nose to her hiney”), raised in Chatsworth by her grandmother, Anna Applegate. She loved the history of her hometown and spent time with the Chatsworth Historical Society. Marge was a loving dog mom, most recently to their golden retriever, Riley and was affectionately referred to by her grandchildren as “Boomer Mom-Mom” because of her former dog named Boomer. Marge loved the game of baseball. She would tell stories of playing ball in the school yard with the boys growing up, and enjoyed watching Phillies games. However, the team that stole her heart was the Seneca HS baseball team. She rarely missed a game while her grandsons were playing, often getting to the games early to watch warmups and make sure she had the best view of the game. She was a unique source of strength and toughness, as well as comfort, support, and unconditional love. She was always at the center of every family gathering with her wit and humor, and served as a moral compass for her family. Marjorie is survived by her loving husband of 47 years, Earl Hall, and their dog Riley. She is also survived by her sister, Sylvia Crain; children Robert Sprague, Linda (Reg) Williams, Leslie (Sonny) Glenn, and Carol (Jack) Swain; grandchildren Kerrie (Greg) Blash, Zeke (Sarah) Sprague, Danny (Christina) Williams, Zack Sprague, Cody Mitchell, Ryan Williams, Chase Swain, 2 Great-Grandchildren, Kolsen Blash & Harper Mitchell A viewing will be held at Perinchief Chapels, 438 High Street, Mt. Holly on Friday, February 4th, from 9-11am, immediately followed by a memorial service at 11am. Interment will follow the service at Park View Cemetery, 25 Fostertown Road, Medford. In lieu of flowers and in remembrance of Marjorie Hall’s life, the family asks that you make a donation to the Burlington County Animal Shelter, 35 Academy Dr. Westampton, NJ 08060, watch a ballgame, or listen to a John Denver album. Country roads, take her home. https://www.tributeslides.com/tributes/show/GQL3BF8MRKXJNBHP

Marjorie E. Hall, of Southampton, passed away on Tuesday, January 18, 2022. She was 83 years old. Marge was a proud Piney (&#8220;from her nose to her hiney&#8221;), raised in Chatsworth by her grandmother, Anna Applegate. She loved the history... View Obituary & Service Information

The family of Marjorie E. Hall created this Life Tributes page to make it easy to share your memories.

Marjorie E. Hall, of Southampton, passed away on Tuesday, January...

Send flowers to the Hall family.