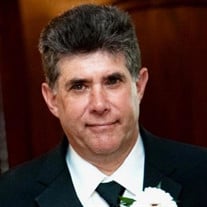 Matthew McIntyre, 66, of Ocean View, Delaware passed away on January 19, 2022 after a year-long courageous battle with cancer. Matthew (Matty/Matt) was born on June 10, 1955 in Staten Island, New York. After graduating from South Brunswick High School, NJ in 1973, Matty enlisted in the United States Navy and served six years as an electronics technician. He then held a long career as a project manager for both Lockheed Martin and Arris before retiring in July 2019 to the beaches and golf courses in Delaware. Matt was an avid golfer most of his life and developed a true passion for the game. Through his love of golf he developed long lasting friendships, traveled and played many different courses and always considered it a great day regardless of his score or the weather conditions. Matty was a true family man and was a devoted father and grandfather (Pop). His most recent favorite times were with his children and grandchildren at the beach. Son of the late Matthew T. McIntyre and Edna McGahan Gobielle, he is survived by his wife Anita McIntyre of 39 years, son Christopher McIntyre and wife Rachele McIntyre, daughter Leanne McIntyre McAneny and husband Matt McAneny, five beautiful grandchildren Calum, Madelyn, Lucy, Ellie, Averie, his siblings, in-laws, mother-in-law, nieces, nephews, aunts, uncles and many cousins. He will be deeply missed by all who knew and loved him. In Matty’s case those were typically one in the same. A Memorial Service for Matt will be held on Friday February 18 at 12pm at Perinchief Chapels, 438 High Street Mount Holly, NJ 08060. Friends and relatives are invited to visit with Matt's family from 10am-12pm prior to the start of the services. Interment will be held privately. In lieu of flowers donations can be made to First Tee-Delaware at firstteedelaware.org

The family of Matthew T. McIntyre created this Life Tributes page to make it easy to share your memories.

Matthew McIntyre, 66, of Ocean View, Delaware passed away on...

Send flowers to the McIntyre family.