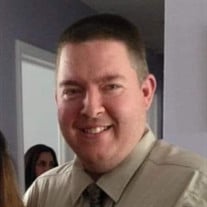 Michael Verpecinskas, of Woodbury Heights, passed away on Monday, March 22, 2021 after a 2-year courageous battle with cancer. He was 49. Born in Elkins Park, PA; the son of Jerry and Lynn (née Collins) Callahan. Michael was also known as “Mike” and “Lumpy” by his many family and friends. He was a 1989 graduate from Mainland Regional High School. He served in the US Air Force. He was an avid fan of the Phillies and his favorite players were Mike Schmidt and Pete Rose. He also enjoyed watching NASCAR. Mike was a Hodgkin-Lymphoma survivor when he was in his 20s. He always had a positive outlook on life even though he faced some adversities in his life. On February 23, 2018, he married his soulmate and love of his life, Danielle Verpecinskas. As an honor and tribute to his late father-in-law, William Verpecinskas, Mike wanted to continue the Verpecinskas name. He is survived by his wife, Danielle; children, Jesse and Wyatt Nipe; brother, Matthew Sommers and his wife Stephanie and their daughter, Maya; his parents, Jerry and Lynn Callahan; the sister-in-laws, Chrissy Abbas and Linda Yankowski and her husband, Vinny; nephews and nieces, John Robb, Michelle Garwood and her husband Lewis and their children, Ebbie, Michael, Kylie, and Logan; Alexis Dixon-Longo and her husband Julian and their children, Kaylee, Aubrey, and Myla; Alyssa Pacetti and her husband Ron and their children Ronnie and Natalie; his best friend and “brother from another mother” Damian Bordell and his son, Samuel; and his beloved dog, Manchas. A Mass of Christian Burial will be celebrated on Saturday, April 10 at 11 AM at St. Joseph’s RC Church, 606 Shore Rd., Somers Point, NJ. A Celebration of Life service will be held in the summer. In lieu of flowers, memorial contributions can be made in Mike’s memory to the Colorectal Cancer Alliance (www.ccalliance.org).

Michael Verpecinskas, of Woodbury Heights, passed away on Monday, March 22, 2021 after a 2-year courageous battle with cancer. He was 49. Born in Elkins Park, PA; the son of Jerry and Lynn (née Collins) Callahan. Michael was also known as... View Obituary & Service Information

The family of Michael Verpecinskas created this Life Tributes page to make it easy to share your memories.

Michael Verpecinskas, of Woodbury Heights, passed away on Monday,...

Send flowers to the Verpecinskas family.