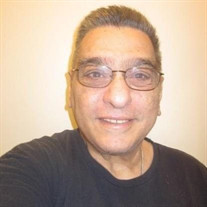 Nicholas Vito Sinopoli of Mount Holly passed away Tuesday, April 5, 2022. He was 67. Nick was born in Newark, NJ in 1954 and was raised and lived in Mount Holly until his passing. He graduated from Rancocas Valley Regional High School in 1972 before enlisting in the United States Marine Corps. After returning to civilian life he was a volunteer firefighter and truck driver for Dow Chemical before beginning his employment with the Post Office, from which he retired after 30 years of service. Nick was a devoted father, grandfather, neighbor and friend to all, from working tirelessly with the class reunion committee, to making sure every Christmas card he mailed contained a lottery ticket just in case it happened to change someone else’s life. He enjoyed model trains, listening to Phillies games on the radio, and spending time with Therese’s dog Chevy. He found so much joy in making people laugh, as anyone who heard any of his many creative voicemail recordings would attest to. Nick was so proud to be a Catholic, a Marine, and son of Mount Holly. Nicholas is survived by his daughters Michelle O’Malley and Therese Sinopoli, son-in-law Brendan O’Malley, granddaughters Madeleine and Amelia O’Malley, sister Jane Stratton, and his nephews and nieces and their children, James Powell Jr., Victor Powell, Stephen Powell, Buffy Turner, Leslie Cranmer, Kimberly Jakubiak, Nicholas Sosa, David Dwyer, and Lacey Moran. He is pre-deceased by his parents Nicholas and Frances Sinopoli, and siblings Mary Powell, Joseph Sinopoli, and John Sinopoli. Friends may gather from 9 to 10:30 a.m. Monday, April 11 at Perinchief Chapels 438 High Street, Mount Holly. Mass of Christian Burial will be celebrated at 11 a.m. at Sacred Heart Church, 260 High St., Mount Holly. Burial in Sacred Heart Cemetery in Hainesport will follow. All are welcome to extend their loving memories of Nick. In lieu of flowers, donations may be made to Disabled American Veterans or Vietnam Veterans of America. DAV.org VVA.org

Nicholas Vito Sinopoli of Mount Holly passed away Tuesday, April 5, 2022. He was 67. Nick was born in Newark, NJ in 1954 and was raised and lived in Mount Holly until his passing. He graduated from Rancocas Valley Regional High School in 1972... View Obituary & Service Information

The family of Nicholas V. Sinopoli created this Life Tributes page to make it easy to share your memories.

Send flowers to the Sinopoli family.