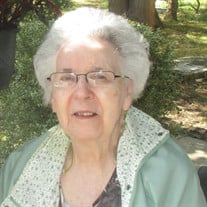 Patricia Cecelia Csajko passed away on November 3, 2020 in Mount Holly, NJ. She was born on St. Patrick's Day, March 17, 1924 in Hallifax, Nova Scotia to Alice (Forrestall) and Joseph Patrick Moore. She was the eldest of two children. Pat emigrated from Hallifax, Canada to New York. Pat married the love of her life, Alexander Csajko, on January 27, 1951 in Jamaica, NY. They had no children, but Pat loved her furry cats. They enjoyed many jaunts to the casinos in Atlantic City. Alexander, a Korean War veteran, pre-deceased her in 2007 after 56 years of marriage. Pat worked as a library technician from 1976 to 1986 as a member of the Civil Service of the Department of Defense at McGuire AFB, Fort Dix. It was there that she became lifelong friends with her fellow librarian Marjory Ewer. She kept in contact with Pat, communicating daily with her even long after Pat had entered a nursing home, until Marjory suddenly passed away a few years before Pat. Another very close friend was Fran Senior with whom Pat made a memorable train trip across Canada. A real lady, her hair perfectly coifed, Pat was always meticulously dressed with matching costume jewelry, which she created and sold. Patricia was an excellent artist and was gifted with great skills; using oils, water colors and charcoal for pencil sketches. She also enjoyed canning . Pat was a 3-time gold medal Olympic weight lifting champion with a great sense of humor and big smile. She was active in her traditional Roman Catholic parish, St. Jude's in Eddystone, PA, then later Mater Ecclesiae, Berlin, NJ. She designed, sewed, and repaired costly vestments, banners and alter linens for both parishes. Pat suffered a stroke in 2013. She spent her last years at Virtua Health and Rehabilitation Center in Mount Holly, where she was wonderfully treated by the caring staff. She was not one to stay idle and would get around to all areas of the building and you would know she was present when you heard laughter and the words uttered: “Oh, my soul!” Pat was pre-deceased by her husband Al. She is survived by her brother Eugene "Bud" Moore of Windsor, Ontario, Canada; beloved niece Barbara Casey of Long Island, NY; niece Pamela Hulka of Delaware; and brother-in-law Neil Kohle of Hempstead, NY. Perinchief Chapels (Mount Holly, NJ) was responsible for making all funeral arrangements. A Requiem Mass was offered at 10:30am, Monday, Nov 9th at Mater Ecclesiae Roman Catholic Church, Berlin, NJ. Her burial, alongside her late husband, at Brigadier General Doyle Veterans Cemetery in North Hanover, PA followed at 1:30 pm. In lieu of flowers, please consider making a donation to St. Jude's Roman Catholic Church in Eddystone, PA.

Patricia Cecelia Csajko passed away on November 3, 2020 in Mount Holly, NJ. She was born on St. Patrick's Day, March 17, 1924 in Hallifax, Nova Scotia to Alice (Forrestall) and Joseph Patrick Moore. She was the eldest of two children. Pat... View Obituary & Service Information

The family of Patricia Cecelia Csajko created this Life Tributes page to make it easy to share your memories.

Patricia Cecelia Csajko passed away on November 3, 2020 in Mount...

Send flowers to the Csajko family.