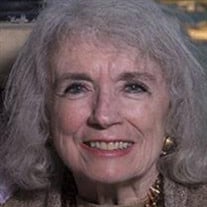 Patricia “Pat” Hunt O’Neill, 84, of Mount Holly, NJ, died peacefully on Thursday, September 16, 2021 surrounded by family. The cause of death was complications from Alzheimer’s Disease, an unrelenting disease for which there is no cure. She leaves a loving husband and partner of nearly sixty years, James M. O’Neill of Medford, NJ; two daughters: Molly (Brian) of Medford, NJ; Patricia of Alexandria, VA and her dog, Tip O’Neill. She also leaves behind an extended family of beloved nieces, nephews, friends, colleagues and her VA patients, “her people,” as she called them given her own military service. Pat was born on March 27, 1937 in Morristown, NJ, to Herbert and Helen Hunt. She grew up in Mount Holly, NJ, where she rode her horse with her dad and favorite Aunt, cheered for Mount Holly High School, joined numerous clubs, excelled in academics and created lifelong friendships. Her zest for life, independent spirit, and ability to connect with people was unmistakable from an early age. Following her graduation from Rancocas Valley High School, Pat enrolled at Villanova University as a nursing student. She was among the first women admitted to the historically all-male University, and she would go on to break barriers and fight for equality, for herself and others, throughout her life. Pat would be a life-long student earning a master’s degree in psychiatric nursing from Catholic University and focusing her life’s work on mental health. She’d go on to be a practicing registered nurse for more than five decades spending much of that time at the National Institute of Health and Philadelphia VA Medical Center caring for U.S. Military Veterans. Following graduation from Villanova, Pat accepted her appointment as a Naval Officer and joined the Navy Nurse Corps where she was stationed at the National Naval Medical Center in Bethesda, MD. Throughout her lifetime, she was a leader in promoting military service - performance, moral courage and dedication to the Nation, and the Navy. It was in the Navy that Pat met Jim, they married in 1963 and began their life together settling in Washington, DC and later having their two girls. Pat returned to her family home in Mount Holly, NJ with her family in tow, and remained in beautiful Mount Holly through the rest of her life. Pat loved music, dancing, cooking, gardening, travel, learning, experiencing things for the first time and introducing others to her passions. She was always up for adventure and a good time, especially with Jim and her two daughters. There was no prouder mother than Pat and her legacy and memory lives on in Molly and Pishie to whom she was a mentor, hero, role model, and best friend. Pat will be remembered for many things - her giant heart, optimism, good cheer and humor, her fashion and flair, her sparkling blue eyes and a contagious smile that would light up any room, her love of good books and being outside tending to her flowers, for her tireless commitment to serve U.S. Military Veterans, for her friendship and for being the very best wife and mother. Mass of Christian Burial will be Celebrated on Friday, September 24, 2021 at 10:30am at Sacred Heart Church, 260 High St., Mount Holly. Friends may visit with the family on Thursday evening from 6pm - 8pm and on Friday from 9am - 10am at the Perinchief Chapels, 438 High St., Mount Holly. Cremation will be held privately. To honor Pat’s memory, please consider a donation to Serenity Hospice of NJ or a charity of your choice. Please take a few minutes to watch Patricia's memorial video here: https://www.tributeslides.com/tributes/show/57DPQQ9LHZDBZL33

The family of Patricia Hunt O'Neill created this Life Tributes page to make it easy to share your memories.

Send flowers to the O'Neill family.