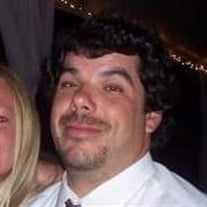 Paul Brian Lisi “Paulie”, of Southampton, passed away on Saturday, February 15, 2020 at home surrounded by his family and friends. Paul was 51. Paul Brian Lisi, was born in Vineland, New Jersey on December 26th, 1968; a Christmas present his mother would never forget. He refused to open birthday presents on Christmas and don’t try and give him a present with Christmas paper on it. Moving on, he lived with his mother, father and younger brother Kevin John in Minnetola, NJ. While in Minnetola, he enjoyed spending time on the farm with his grandparents, both of whom immigrated from Italy. One of his fondest childhood memories is working on the farm picking vegetables. He was fascinated that his uncle could sell Zoysia Grass. As a child, he attended Catholic school through 8th grade at Our Lady of Victories in Landisville. He then moved to Eastampton with his mother and dad while continuing his education. In December of 1984 he met his first love, Jen, through mutual friends in high school. They went to a Christmas dance as friends. Not only did they have fun and enjoy their time together, their son Joshua Paul was born, and their eternal bond was sealed. He went to work for his dad in Bristol, Pennsylvania as a Diesel Mechanic, which he continued to do for the next 31 years. He then met his lifelong love, Charlene. Paul would pick her up from her mom’s house in the 69’ Chevelle SS. From that moment, Charlene knew that Paul would protect her, she wasn’t afraid, and she was safe. They married on February 23rd, 1991. They went on to have two additional children, Nicole Marie and Anthony Paul. Paul took many trips with his kids and wife whether it was going skiing, to Disney, Mexico, Phillies, Eagles or Sixer’s games. Paul enjoyed golfing trips with friends and may never live down going to Tortola without any of the wives. He prided himself on getting up and going to work everyday to provide for his family. He was passionate about cars, Star Wars, trivia and his one liners that would quip any crowd. Whether it was at the beach, on the sandbar, around the dinner table at Holidays or anywhere, he was a wonderful Husband, Father and Poppop who loved nothing more than being with his three children, four grandchildren and wife. He was enamored that his family was finally together, bringing newfound peace to his life. Paul is survived by his wife of 29 years, Charlene Lisi; children, Joshua (Candice) Ferrell, Nicole Marie (Josh) Mackintosh, and Anthony Paul Lisi; grandchildren, Isabella “Bella”, Gianna “G”, Maura, and Hunter William-Paul “Bambam”; parents, Suzanne and Bud Hamm; Father, Joseph Lisi; brothers, Kevin “John”, Stephen, and Tim Lisi; grandmother, Grace Cassaday; numerous Aunts, Uncles, Nieces, Nephews, and cousins. Relatives and friends may attend his visitation on Friday, February 21 from 8:30-10:30 AM at Perinchief Chapels, 438 High St., Mt. Holly. A Mass of Christian Burial will be celebrated at 11 AM at Sacred Heart Church, 260 High St., Mt. Holly. Memorial contributions can be made to Penn Medicine Development (www.pennmedicine.org/giving), 3535 Market St., Suite 750, Philadelphia, PA 19104.

The family of Paul Brian Lisi created this Life Tributes page to make it easy to share your memories.

Paul Brian Lisi “Paulie”, of Southampton, passed away on Saturday,...

Send flowers to the Lisi family.