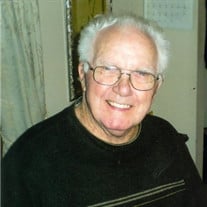 Raymond L. Pofahl February 2, 1924 - August 27, 2020 Raymond Pofahl of Browns Mills, New Jersey passed away on the morning of August 27, 2020 at 96-years-old. He was born in Haskell, Oklahoma on February 2, 1924 to Lyle and Eva (Bradshaw) Pofahl. Raymond’s greatest love and joy was his family. He was a devoted husband, father, grandpa, great grandpa, and friend. He was happily married to Maria (Stachowiak) Pofahl for 73 years. After meeting in Berlin Germany during WWII, they raised three children together in a home that Raymond built for them in Browns Mills. He was blessed to have most of his family close by. When the children were at the house playing in the yard is when he was most happy. Raymond was a retired U.S. Army Sergeant First Class in the 82nd/101st Airborne. In his 24 years of military service that included World War II, the Korean Conflict, and the Vietnam Conflict, Raymond was honored with a Purple Heart and a Bronze Star, along with numerous other service awards. Upon retiring from the Army, Raymond served as a New Jersey State Corrections Officer at Jamesburg. Raymond was a wonderful carpenter, a talented furniture maker, and an artistic whittler. He was an avid fisherman and spent many days on his boat in Barnegat. He enjoyed tending to his fishpond, gardening, hunting, feeding the birds and squirrels that roamed his yard. Raymond shared these pleasures with his family when they would come to visit him. Raymond is survived by a beautiful, extensive family—his wife Maria, daughter Wanda Gillen, partner (late) Miles Taylor, son (late) Michal Pofahl, wife Terry Pofahl, son Thomas Pofahl, wife Jeanette Dodds-Pofahl. Raymond will also be missed by 7 grandchildren and 10 great grandchildren—granddaughter Melanie Eccles, husband Chad Eccles, great grandchildren Paulie, Joey, Andy, Jonnie; and son-in-law (late) John “Jack” Gillen; grandchildren Misha Bartlett, husband Adam Bartlett, David Pofahl, wife Aliki Pofahl and Kaylee Pofahl; grandson Thomas Pofahl Jr., wife Misty, great grandchildren Makenziy McClure, Sammy, Sonny and Luke; granddaughter Tiffany LaSanta, husband Renee, great grandchildren Ava and Sonia; granddaughter Tessa Pofahl. Raymond is cherished by his sister, Ann Davis, and late siblings Ervin, Paul Ray, Betty, Mary, Bobby, and Tommy Pofahl, and special niece Olenka Kurosky along with numerous nieces and nephews. A visitation will be held on Wednesday September 2, 2020 from noon to 1:30 p.m. at Perinchief Funeral Home on 438 High Street in Mount Holly, N.J. A service will follow at the Mount Holly Cemetery.

The family of Raymond L. Pofahl created this Life Tributes page to make it easy to share your memories.

Send flowers to the Pofahl family.