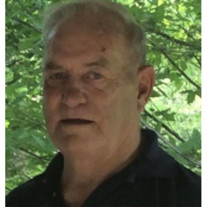 Reginald Stevenson, as known as “Reggie”, passed away suddenly on June 23, 2021, at the age of 79, in Mounty Holly, NJ. Reggie was the son of the late William H. Stevenson, Sr and Emma C. Stevenson (Parks). Reggie was born on September 20, 1942, in Moorestown, NJ and raised in Mount Holly, NJ. Reggie worked as a General Supervisor for the Burlington County Highway Department. Reggie served in US Navy on the USS Furse DD-882 Destroyer in the 1960’s. Reggie was a past captain of the Union Firehouse of Mounty in the 1970’s. Reggie was an active member and past officer of the Mount Holly VFW in the 1980’s; as well as, an active member of Mount Holly Moose, and American Legion. Reggie was married for 55 years to the late Dorothy Stevenson. Reggie was his wife’s caregiver for the past 6 years. She passed just 9 months earlier. Reggie dedicated his life to his family and grandchildren. He made sure he did not miss a recital, baseball game, soccer game, or graduation. Reggie was a loving husband, father, PopPop, great grandfather, uncle, brother-in-law, and friend. Reggie is survived by his children Daniel Stevenson, Christine Suarez and her husband Napoleon, Marianne Pallante and her husband Brian, his grandchildren Daniel Stevenson and his wife Jamie, David Stevenson and his wife Filomena, Tyler Stevenson-DeLoach, Jasmine Stevenson-DeLoach, Kara Pallante, Thomas Pallante, Napoleon Suarez, and Janel Suarez, his great grandchildren Danger Stevenson, Rosalie Stevenson, Roman Stevenson, Nalah Jones, and Nolan Suarez, and many in-laws, nieces, and nephews.​ Reggie was loved by many and will be greatly missed. Funeral Services will be held on Wednesday, June 30 at 12:00pm at Perinchief Chapels, 438 High St., Mount Holly. A walk-through visitation will be held from 10:00am until the time of the service. Interment will take place in Evergreen Cemetery, Lumberton. Face coverings must be worn and all social distancing guidelines followed. www.perinchief.com

The family of Reginald E. Stevenson created this Life Tributes page to make it easy to share your memories.

Reginald Stevenson, as known as “Reggie”, passed away suddenly...

Send flowers to the Stevenson family.