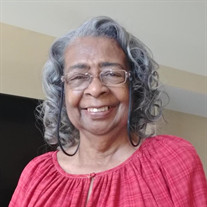 Reola J Spencer, also known as Sista, Re, Re Re, Aunt Re, Aunt Sweetie, Grandma, Mommy Re, Pretty Lady, Mom, Mommy and Mother, was born from the union of the late Preston and Maud E. Johnson on September 19, 1928 during a family trip to Spotsylvania Virginia. Reola departed this life to see the face of Jesus on Friday, January 21, 2022. Reola, born the second of eleven of children, was raised in Mount Vernon, New York and was baptized at an early age. She lived a miraculous life even after being stricken with heart disease at the young age of 15. Due to her illness, Reola spent most of her high school years in bed nurturing and cuddling her younger siblings. During her healing, Reola learned how to prepare taxes and ultimately prepared the household taxes for the family. When strong enough to return to school, Reola attended the Mount Vernon school system, graduated and began to work as a housekeeper to help with the family finances. As an adult, Reola always wanted to be helpful and would volunteer to babysit for her sisters’ children. She was also the Maid of Honor in two of her sisters’ marriages. Reola worked in the garment industry, where she learned to sew. It became a hobby for her, and she spent many hours designing and sewing clothes for herself, her husband and her daughter. She really loved to sew! Her sewing was so well done to the point where her finished garments included tags that read: “Designs by Reola”. Reola married the late Howard C Spencer in 1972 and moved to Willingboro New Jersey, where she lived for more than 40 years. Their home became the travel resting spot for the family when they traveled from the North to the South and from the South to the North. During family visits, she would greet visitors with a big hug and kiss, and then she would begin to touch, squeeze and rub them to make sure they were well. Some family members would just sit next to her so they could get through this “Love Ritual” sooner rather than later. Reola was a member of the Willingboro Guild and Widowers Club in Willingboro, New Jersey. She was heavily involved in the coordination and implementation of the activities that these two community groups sponsored. She looked forward to the trips to Atlantic city and the Annual International Day that the Guild sponsored each year. Reola would always bring fried chicken wings to the Annual International day as she felt that fried chicken wings were one of the preferred foods for African Americans! She also loved to attend the events the Willingboro Widowers club sponsored. They played many board games and card games; they even gambled for pennies!! They were big spenders!! Reola was a soft-spoken woman with soft smooth skin. However, when Reola spoke all listened and heard. She, with the help of Sherman Baylor, Cordia Etheridge, David Baylor and Louise Simmons, started the first family get together, in 1987. These family get togethers are now more commonly known as the Reynolds Family Reunion. Additionally, Reola also helped her sister Alice plan the family picnics that were held at Lake Hopaccone in New Jersey; always bringing her specialty dish of Fried rice and Shrimp. In 2015, Reola moved to Florida, to be close to her daughter, where she resided until her home going. While in Florida, she assumed the role of Matriarch to her favorite son-in-law’s family. She was lovingly called: Mom, Mother Spencer and Grandma. Reola is survived by her Daughter and Son-in-Law Kathy Johnson and Randolph Scott; Daughter -in-Law, Genesee Davis, Sister, Alice Benson; Brother, Oliver Gary Johnson and Wife Paulette Alfie Johnson; Sister -in Law Janet Johnson; seven Grandchildren; Jamar Johnson-Thompson and husband Daquan Johnson-Thompson, Maria Etienne and husband Freed Etienne, Michele Spencer, Kim Davis and husband LaBrandt Davis, Kelly Scott, Randolph Scott Jr and wife Mia Scott, and Katrina Scott; 13 Great Grandchildren; and a host of loving relatives and friends. Reola was preceded in death by her son, Howard M Spencer. R Reola lived a long, miraculous life, with a quiet soft-spoken spirit, gentle touch, and a deep-loving heart; full of love, care, and sincerity. She would not want to be remembered with heavy hearts, but rather with rejoicing thanks. Let's honor her by loving one another, supporting one another, keeping family close and asking God to order our footsteps. Relatives and friends may attend her viewing on Monday, February 7 from 10-11 AM at Perinchief Chapels, 438 High St., Mt. Holly. Funeral services will begin at 11 AM at the funeral home. Interment at Brig. Gen. Wm. C. Doyle Veterans Cemetery, Wrightstown. Due to cemetery regulations on flowers, memorial donations can be made in Reola's memory to: Life Path Hospice , Chapters Health Foundation Donation - LifePath Hospice, Inc., Designation - Melech Hospice House Live Streaming via Zoom starts at 10:00 AM (EST) https://us02web.zoom.us/j/82665009470?pwd=b2NQV2xpN05Ud3A4SFFKTzNaMWRwdz09 Meeting ID: 826 6500 9470 Passcode: RS123 (Case Sensitive)

Reola J Spencer, also known as Sista, Re, Re Re, Aunt Re, Aunt Sweetie, Grandma, Mommy Re, Pretty Lady, Mom, Mommy and Mother, was born from the union of the late Preston and Maud E. Johnson on September 19, 1928 during a family trip to Spotsylvania... View Obituary & Service Information

The family of Reola J. Spencer created this Life Tributes page to make it easy to share your memories.

Send flowers to the Spencer family.