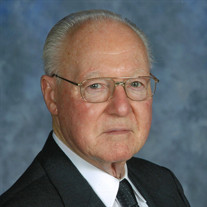 Richard L. Mick, age 92, of Burlington, NJ passed away among family and friends on August 10, 2019. Born on Christmas Day in 1926 to Russell and Eileen Mick in Browns Mills, NJ, Richard attended Mount Holly High School (now Rancocas Valley Regional High School) and graduated early in order to enlist in the U.S. Navy. A World War II veteran, he earned several medals while serving his country in the South Pacific. He returned home to Mount Holly where he married Emma Kiesel and raised two children, Alan and Patricia. After attending watch repair school and a short period doing watch repair, he knew he wanted to do more and he moved on to the paint and hardware business. He soon opened a very successful business on Route 38 in Mount Holly, eventually building a plaza and becoming a landlord for other businesses. After many years, Richard sold the plaza, but realized he still loved the business and opened another store a short time later in Berlin, NJ. Richard never lost his love of clock and watch repair and long into his retirement continued to work on every kind of grandfather, cuckoo, and mantel clock, as well as all types of watches. He also had a passion for beekeeping, which he continued to do long into his older years. In 2013, Richard celebrated his 50 year membership of the Mount Holly Masonic Lodge #14. Richard was a loving father, grandfather, uncle, and great grandfather, and will be missed very much by his family and many friends .He is survived by his son Alan, granddaughters Joan Albert (Brian) and Karen Garfield (Scott), great-granddaughter Hannah, son-in-law John Wendler, long-time companion Carolyn Farrow, a very special nephew Rich Carpenter, who devoted much of his time to help and care for him during the last several years, and many friends and other family members. Richard was predeceased by his daughter Patricia, brother Bill, and sister Henrietta. All are welcome to attend a service to be held at Perinchief Chapels 438 High St, Mount Holly, NJ 08060 at 11 a.m. on Thursday, August 15th. The viewing will begin at 9:30 am. In lieu of flowers, donations may be made to the charity of your choice.

The family of Richard L. Mick created this Life Tributes page to make it easy to share your memories.

Send flowers to the Mick family.