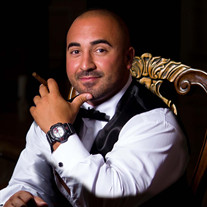 Robert Arena passed away suddenly on Monday, October 18, 2021 at the age of 36. He is survived by his wife, Cristina, mother Louise, father Fred, brother Michael, step father Joe and his two beloved corgis Enzo and Sofie. Rob was a "larger than life" person, and to know him was to love him. Big heart, big smile, big biceps, big teddy bear. He was a special ed teacher by trade and a phenomenal girls track coach by heart. A self proclaimed “mama’s boy,” Robert loved his family with all his heart. His brother, Michael, was his best friend and confidant. Robert met his wife Cristina in 2011. They married July 2016 and lived in Jersey City with their two dogs. Robert graduated from Rancocas Valley Regional High School in 2003, studied at Widener University receiving a degree in Criminal Justice and continued his education online at Grand Canyon where he received his masters degree in Special Education. Robert was working on another masters in Educational Leadership at NJCU. It was when he began his teaching career in Jersey City Public Schools that he found his true passion and purpose when he took a position as Assistant Track and Field Coach at Henry Snyder High School. He was humbled and honored to be named the Hudson County Track Coaches Association Coach of the Year in 2017 and the Snyder High School Coach of the Year 3 times. Rob was so special and was able to make connections through all phases of his life. He was able to succeed in any role that came his way. The people of Deerwood, Burlington Township Special Services, Liberty Lake, H&R Block, and Spirit of Halloween were fortunate to have met him and experience his aurora of awesomeness. Relatives and friends are invited to attend his viewing on Wednesday from 6-9 PM at Perinchief Chapels, 438 High St., Mt. Holly. A Mass of Christian Burial will be celebrated on Thursday at 10 AM at St. Katherine’s Parish at St. Paul’s Church, 223 E. Union St., Burlington. Entombment to follow at Odd Fellows Cemetery, Burlington. Robert Arena had so much more to give and will be missed by so many. He will live forever in our hearts and through the Robert Arena Memorial Scholarship. In lieu of flowers you can place a donation to: https://www.gofundme.com/f/robert-arena-memorial-scholarship-fund?utm_source=customer&utm_medium=copy_link&utm_campaign=p_cp_guide_do&member=14704691

Robert Arena passed away suddenly on Monday, October 18, 2021 at the age of 36. He is survived by his wife, Cristina, mother Louise, father Fred, brother Michael, step father Joe and his two beloved corgis Enzo and Sofie. Rob was a "larger than... View Obituary & Service Information

The family of Robert Arena created this Life Tributes page to make it easy to share your memories.

Send flowers to the Arena family.